Katniss Everdeen’s story is finally coming to a close and the producers are hell bent on doing it with a big send-off. The last of the young adult film franchise is eyeing great numbers in the box-office with the upcoming film’s opening weekend in the US.

According to Variety, analysts are expecting the final installment to the dystopian film series to generate $125 million or higher on its opening weekend, and put it just above “The Hunger Games: Mockingjay Part 1” which earned $121.9 million.

“The Hunger Games: Catching Fire,” the second movie in the series, kicked off with $158.1 million opening weekend in the US while the first movie opened at $152.5 million. Lionsgate however, has high hopes for another record-breaking figure for the Jennifer Lawrence starrer.

The District 12 heroine will take her final bow as the Suzanne Collins literary franchise will open this week in more than 4,000 cinemas in North America alone.

Across the globe, the movie has already started showing in the United Kingdom, Germany, Russia, Korea, Mexico, Brazil, and China where fans have already seen Katniss Everdeen in action.

Lionsgate is eyeing to reach around $285 million to $305 million on the film’s global opening weekend, Deadline reports. “The Hunger Games: Mockingjay Part 1” generated $276.2 million globally on its opening weekend a year ago.

As per the International Business Times, Lionsgate has canceled red carpet interviews during the premiere of “The Hunger Games: Mockingjay Part 2” in Los Angeles. This is in observance of the massive attacks in Paris that occurred over the weekend.

Speaking to Entertainment Weekly, a representative of the studio confirmed that in respect to the recent grave occurrence in the French capital, where some scenes of the movie were filmed, the film’s L.A. premiere will go as planned with some modifications.

Cast members and producers opted to skip interviews and proceeded with honoring the series’ incredible fans who have always supported the franchise with such enthusiasm and passion.

EW reports that films such as “Bridge of Spies” and “Jane Got a Gun” have also canceled their red carpet premiere and press interviews in the wake of the Paris attacks.

The last entry to the successful film franchise opens alongside the Seth Rogen comedy “The Night Before,” and STX Entertainment’s thriller “Secrets in their Eyes” which stars Julia Roberts and Chiwetel Ejiofor.

Fans will see Lawrence’s Katniss, Josh Hutcherson’s Peeta, and Liam Hemsworth’s Gale battle it out to save their city and themselves from Snow’s wrath when “The Hunger Games: Mockingjay Part 2” hits US theaters on November 20 and on November 19 in Australia.

The film picks up right after the events of “The Hunger Games: Mockingjay Part 1” with Peeta still brainwashed thanks to the Capitol’s mischievous ways and Katniss along with Finnick, played by Sam Claflin, and the rest of District 13’s propaganda team staging the historical rebellion.

The march towards the Capitol takes on the air as the revolution maneuvered by President Alma Coin, played by Julian Moore, contemplates power after the fall of Donald Sutherland’s Snow.

According to US Magazine, the last addition to “The Hunger Games” franchise is an improvement over previous installments although it struggled a lot with how to keep the movie long enough before the action starts and end.

Those who have read the novel pretty much have an idea that all films have been faithful to its literary basis amid some minor alterations. The last two movies of the franchise are based on the final book “Mockingjay.”

Reviews say that the group’s journey through Panem is filled with lethal and violent obstacles enough for Finnick to dub it as the 76th annual Hunger Games.

Some critics noted director Francis Lawrence’s lack of emotional aspect to convey the standoff at the Capitol as heavy as in the novel. 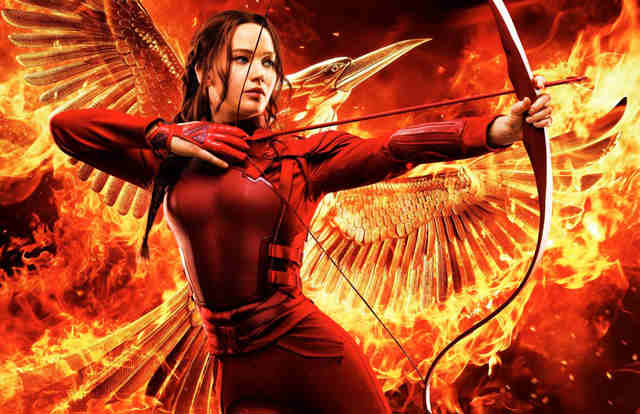 JLaw is effortless in portraying the character where her fame has skyrocketed immensely. The Oscar-winning actress deserved an ending for Katniss that is faithful to the source material and a grand finale that highlights her acting prowess.

Reviews say that the heart of the Hunger Games phenomenon lies with Suzanne Collins and her ability to deliver a trilogy that is able to speak of bravery, survival, and women empowerment.