5 Seconds of Summer (5SOS) frontman Luke Hemmings might be coming clean soon about the real deal between him and his mystery girl.

On September 19, the 19-year-old singer was spotted with her rumored brunette girlfriend leaving The Nice Guy Lounge in West Hollywood early in the morning. Luke’s bandmate Ashton Irwin and his girlfriend Bryana Holly tugged along with the pair after what seemed like a double date.

Last week, Hemmings and his girl, who goes by the name of Arzaylea on social media, was also spotted holding hands while chilling in the same Los Angeles celebrity hotspot, the Daily Mail reports. There’s a huge possibility that her Twitter and Instagram name is not her real name. No word has come out yet about the real identity of the vocalist’s rumored love.

Hollywood Take reports that Luke and Arzaylea have been hanging out for months now and that the singer’s rumored lover is actually a die-hard fan of the rock band. The Inquisitr reports that she’s been with the band for a while now, both on social media and in person.

The girl was photographed at the bands’ shows alongside Holly. Arzaylea even posted a photo on Instagram wearing Luke’s shirt. Fans were also quick to note that Hemmings is following Arzaylea on Twitter which implies that there really must be something going on between the two.

On the pair’s recent sighting, Luke was photographed walking in front of his date donning a black denim jacket and skinny jeans. Her date, who sported a black midriff singlet, a leather jacket, and a pair of gray ankle boots, covered her face under her long hair from the paparazzi.

Meanwhile, Ashton was seen walking next to his swimwear model girlfriend. The 21-year-old singer wore a white button-up shirt and a corduroy hat to match while his 22-year-old lady love matched his dress code by sporting an all-black ensemble.

Speaking to Rolling Stone magazine in July, Ashton accidentally admitted his relationship with Bryana amid 5SOS’s ‘no girlfriend’ policy. Irwin went on to say that his girlfriend was the inspiration to the band’s breakout hit “She Looks So Perfect.” This probably prompted his bandmate Luke to finally go public with his rumored romance with Arzaylea.

Hemmings, along with his bandmates Irwin, Michael Clifford, and Calum Hood just wrapped up their ‘Rock Out With Your Socks’ world tour over the weekend after six months of performing on the road. It’s not surprising that the boys are enjoying their day off from their busy schedule.

Earlier this summer, Luke gave out a hint that his bandmates have made it tough for him to date. Speaking to Access Hollywood, Hemmings says that the girl he’s dating must jive in with his bandmates first of all. The Sydney-born singer has remained mum whether he has a girlfriend or not, but Hemmings and his mystery brunette being spotted together so often has the fans sure about the brewing romance between the pair.

Meanwhile, as for the whole gang, the boys decided to celebrate the wrap of their world tour by going to Universal Studios to attend Halloween Horror Nights on September 19.

According to Sugarscape, Luke, Calum, Ashton, and Michael decided to spend Halloween earlier this year. It’s only September, but it turns out that Universal Studios’ Horror Nights had already marked its scary opening over the weekend. 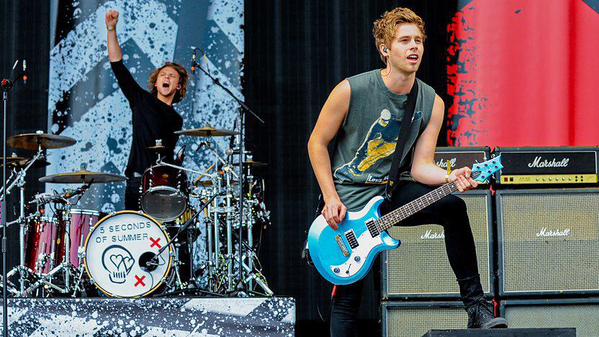 The Australian rock group decided to have the sneaky and scary first glimpse of Horror Nights and they spent it with “Beverly Hills 90210” alum Shenae Grimes and “High School Musical” star Ashley Tisdale. On Instagram, Tisdale posted a photo of the crew and judging by her caption, it looks like they had too much fun.

Earlier this month, the foursome also launched thenewbrokenscene.com, which is the band’s new website. Hollywire reports that the website is part of the tease regarding the band’s second Derp-con event.