Our favorite Devil has gotten another season, and it’s going to be supersized, and it will have a better timeslot, and here’s when we’ll have a chance to see it!

Hurray! Fox has renewed “Lucifer” for a third season that will consist of 22 episodes.

Originally, this hellish show was renewed for season 2, and it was planned for this season to consist of 18 episodes, but, they got a “back-nine” order for additional 4 episodes!

So, the 18th episode is basically the season ending, and to be honest, at the end of this episode, everything came perfectly together as season 2 came to a close. The Flaming Sword and its assembling have been the most important point in this season, and the twist where Amenadiel has the key, which marks him as the Favorite Son was simply a stroke of genius. No one expected it.

The resulting conflict was so deep and difficult to deal with, that Amenadiel needed time to process. From everyone wondering what happens when Charlotte gets to Heaven, to her torturing Linda and learning that Lucifer is planning to double-cross her – this episode is packed with great humor, genuine emotion, interesting plot twists and sealed with an extremely interesting finish.

As Lucifer sent his mother into the void to create a universe of her own, he again found himself withholding the truth from Chloe, which made him want to tell her everything, he phoned her to tell her that he is on his way – and then a mysterious attacker knocked him out! Next scene got us all completely flabbergasted – Lucifer is in a barren desert, shirtless, blistered and having wings again!

This season clearly left us with more questions than answers, but it was one hell of a ride!

”We designed this season to be an 18 episode arc because we originally were going to be 18 episodes. But then we got 4 more! Surprise!,” executive producer of Lucifer Joe Henderson wrote on Twitter. “So we decided to create four episodes that let us play around a bit. Dig deeper into the character stories, play with the format a bit, etc.”

Those four episodes will not be aired now, they will be standalone character studies, and will air at the start of season 3 next fall. As Henderson revealed in his tweet, these four episodes “stand on their own, but also pick up plots we’ve introduced and bring in new stuff we’ll play with in season 3”.

Lucifer first debuted as a midseason show in January 2016, with a 16-episode run, and then it got a more traditional 22 episode order for season 2. This means that we will get the remaining 4 episodes together with 22 season 3 episodes. One jumbo season of Lucifer coming right up!

This show centers around Satan, the Devil, the Fallen Angel – Lucifer Morningstar (in the form of magnificent Tom Ellis), who gave up on his job at Hell’s gatekeeper, and took residence in Los Angeles where he opened a club, and started solving crimes with an LAPD detective Chloe Decker. 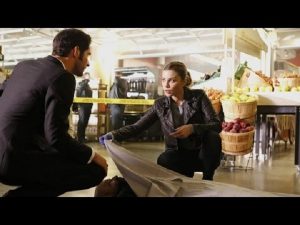 This might surprise many of you, but this show is outperforming its heavily promoted and hyped lead-in Gotham. Lucifer is averaging incredible 3,8 million viewers, while Gotham has about 300,000 less. When you look at other DC Universe shows, this places Lucifer on par with Arrow, still a bit below The Flash but way above Supergirl. Seems that the key to DCU series renewals is very simple – don’t get ordered by NBC.

“’Lucifer’ is one of those rare shows that starts strong out of the gate, and just keeps getting better and better,” said Fox Broadcasting entertainment president David Madden. “Tom, Lauren and the entire cast have really made these characters three-dimensional, and the production team — Jerry, Len, Jonathan, Joe, and Ildy — is one of the best in the business. We’d also like to thank our partners Warner Bros. for their commitment to this show and we look forward to seeing where this wildly innovative series takes us in Season 3.”

In the name of that, they have already released a teaser trailer for season three, that you can see here:

From what we heard, season 3 will air on Mondays at 8 pm – it will seamlessly slip into Gotham’s old timeslot. At the moment, Fox hasn’t announced an exact date yet, but our guess is that Lucifer Season 3 will premiere on September 18 or 25.