Why, and how did this tragedy come to pass?

The viewers of Quarry just got news that they were anticipating for a long time – and they are not good. After months of speculation, Cinemax decided to come clean and announce that they canceled the pathos-driven, morose drama after one season. And to seal the coffin, series co-creator Michael D. Fuller stated that the show will not be returning to any of other networks either.

Fans of the series have been waiting to learn about its fate ever since its September-October run of 8 episodes had concluded.

Quarry is and adaptation of a prolific 1976-present novel series by Max Allan Collins. It is set in 1972 and stars Logan Marshall Green as Max Conway, who is a Marine sniper vet from the Vietnam War. After a pretty tough transition into a civilian life after he came back home to Memphis, our protagonist finds himself thrown into the orbit of the „Dixie Mafia“, who have a desire to use his military-based talents for locally sourced wetwork. Mixed with flashbacks from war, the series shows an already tortured man and the road leading him into the world of contract killing. This series also co-stars Peter Mullan, Jodi Balfour, Damon Herriman and Nikki Amuka-Bird.

In an official statement from Cinemax, it was said: “We are immensely proud of the work by all of the talented individuals who contributed to Quarry,” a rep for Cinemax said in a statement. “After evaluating ideas for continuing the story in the context of our future plans for Cinemax, we decided that it was best for all involved to end the narrative with Mac swimming across the Mississippi”.

Cinemax programming president Kary Antholis explained in March what was their decision all about. Cinemax plans to focus on action dramas that will be co-produced internationally. At the same time, they also announced the cancellation of „The Knick“ after two seasons. Even before the official cancellation, there were hints that this show starring Clive Owen will not be coming back for season 3. After all, the lead character was killed off in the season 2 finale. But, ok, we get that as this show was critically acclaimed, but it failed to generate a huge viewership.

On the other hand, Quarry had a fine amount of loyal viewers which it generated after only 8 episodes… So what went wrong?

Series co-creator Michael D. Fuller explained the cancellation of this drama series in a lengthy statement “After a protracted and agonizing process, we have final confirmation that ‘Quarry’ will not be returning to television. There were several factors that contributed to the show’s ultimate fate, but a regime change at HBO and a re-re-branding at Cinemax were of particular significance; we attempted to find another home for the show but were unable to do so.”

He also wrote that when it came to ratings, critical response and audience turnout, Quarry would have gotten a second season – if those were the only criteria in question.

“My writing partner on the project (and one of my best friends of nearly 20 years) Graham Gordy and I first came across Max Allan Collins’ Quarry novels in December of 2011. We then worked on Season 1 of Rectify and spent the rest of 2012 developing Quarry w/ Anonymous Content writing the pilot and the series bible.

We sold the show to Cinemax in the spring of 2013, shot the original pilot in the summer of 2013, received the series greenlight in summer of 2014, went into production in the spring of 2015 and aired in the fall of 2016. Half-a-decade for what ultimately amounted to one season of television that I am immensely proud of personally and professionally.” – apparently Fuller is in mourning for his passion project.

From what Fuller wrote in his blog, it is clear that there was an interesting development after season’s finale in which we see Mac in possession of a mysterious toiletry bag, stripping down and swimming across Mississippi River.

“Season 2 was going to be set in 1973 and see Mac fully immersed in The Broker’s network, the arrival of Mac and Arthur’s war buddy Hall Prewitt and the trouble coming w/ him, Buddy asserting his individuality, all w/ the specter of Watergate looming. We actually wrote the entire second season, 6 episodes, before receiving word that Cinemax was going in a different direction w/ their branding and content. Since we didn’t get a Season 2, let’s just speculate as to if Mac actually made it to the other side of the river.) 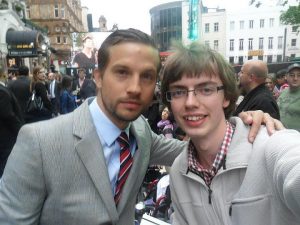 It’s a sadness I will carry w/ me for the rest of my life, but there’s a tremendous measure of solace in the fact that I had the opportunity to work w/ some of the most immeasurably talented people in the world on something we all believed in and deeply, abidingly cared about.

A Memphis-BBQ-platter sized thanks is due to our wonderful cast and crew who made our writing better than it had any business being, and to Max Allan Collins himself, who trusted us w/ a character he’s lived w/ for 40 years: thank you, sir. I hope we didn’t mess it up too badly.”

Sadly, Quarry will remain an 8-episode peculiarity that people will be able to enjoy through streaming outlets. But, do not despair, because Mac Allan Collins – writer of these novels is not showing any signs of slowing down, as the 14th novel title Quarry’s Climax is set to hit shelves in October. So, for all the fans, this short television series can serve as a live-action window into this deep literary mythology that spans decades.