Ever since the unveiling of the first Apple Watch, the market has been massively flooded with third party add-ons, by accessory makers. There was a wide range of accessories to choose from, starting from watch bands to docks. However, Elago has found a way to stand out from the crowd.

With its W3 Stand, Elago has proved itself to be a class apart from its competition. The stand resembles a vintage Macintosh 128K. Moreover, by leveraging the Nightstand Mode on the Apple Watch, Elago is bringing back memories of the iconic Mac. Not just that it’s affordable too, priced at $15 only.

Elago has done a great job of blending throwback design with functionality suitable for modern day. In short, this is probably as good as it is going to get, as far as Apple enthusiasts are concerned.

Made from scratch-free silicone, the W3 provides an additional amount of smoothness in texture making it ideal for docking the Apple watch at the day’s end. As the display slides between two pieces of material, there is not chance for the glass to get damaged. This was a smart move on Elago’s part.

The vintage looks have hit the jackpot, on the front there is a small diskette drive, while the green coloring of the Nightstand Mode matches the 1984 look perfectly. The W3 dock is available in both White and Black versions by Elago. So, one can mix according to one’s own needs.

While the white version matches perfectly with the vintage look, its black counterpart looks sleek even on the nightstand.

According to 9to5Toys, the W3 by Elago could very well win the award for being the cutest Apple Watch Stand till date. All one has to do is simply insert their charging puck and slip the Watch into the slot, which will turn the device into a miniature replica version of the original Macintosh.

The stand rivals the overall shape of the Macintosh not only from the side but also from the front, though it is tilted back for easier viewing on the Nightstand.Given that there is no risk of the device getting scratches on it for we know it is made of soft silicon, it is going to last well beside the bedside table. The Elago W3 stand is priced at $14.99 on Amazon.

Elago’s The W3 is the best medicine to cure the nostalgia of those nostalgic about the original Macintosh monitor when kept in the Apple Watches Night Stand mode.That old-fashioned look of the device even comes finished with a floppy diskette slot. 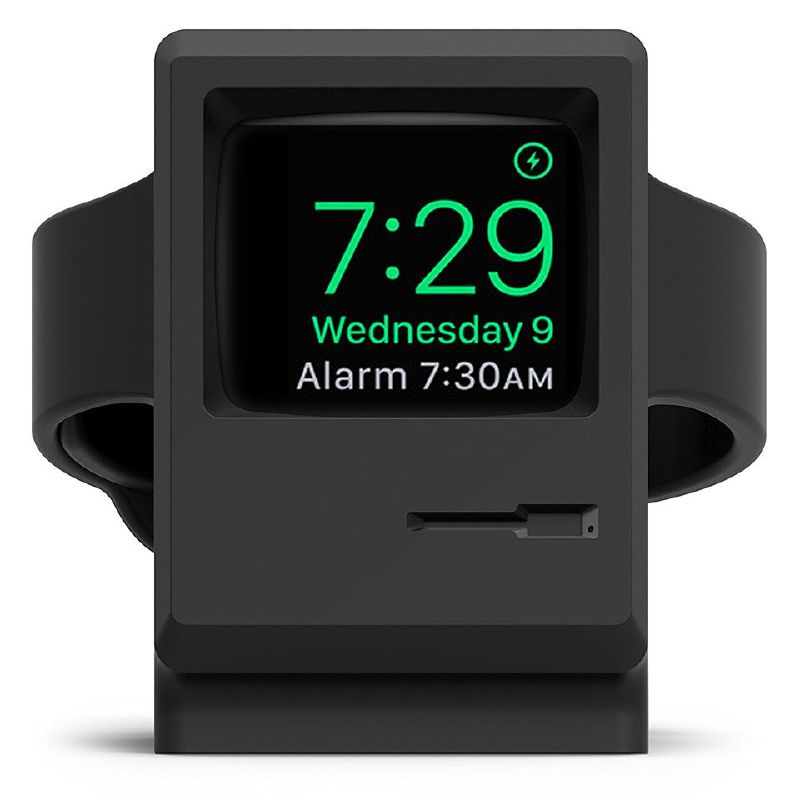 As the W3 is fashioned out of a scratch-free silicon owners won’t have to fear damaging their watch while eitherintroducing or removing it from the stand. Besides it’s easy to use, simply slide your Apple Watch into the slot situated at the top of the stand to charge it. It has the perfect size for keeping on a nightstand and its design permits for easy usage or access to main functions like alarm clocks and messages.

Elago’s W3 Apple Watch Stand is compatible with all Apple Watch models and is obtainable now through their website for $14.99. So, if anyone wishes to own their small piece of this gadget from the past can simply head over to Elagostore.com.

Similar to the initial Macintosh it too has the floppy drive on the right, but then again a tiny replica keyboard and mouse are not included, regrettably.