The last time that electric sports car concept developer Nanoflowcell came up with a Quant concept last year, the vehicle had 700 volts on its concept sports car, called the Quant FE.

With reports that Nanoflowcell will be ushering the Quant 48Volt in the upcoming Geneva Motor Show, many are bewildered on how the company was able to do it using hydrogen fuel cell.

Despite the voltage reduction, performance reportedly does not drop at all, though, at least not on the latest piece of paper Nanoflowcell has issued.

Nanoflowcell first showed its 48Volt electrical system on the more modest, everyday-driver Quantino concept, which debuted next to the 1,075-hp Quant F at the 2015 Geneva Motor Show.

After running through a couple of years of Quantino testing and development, Nanoflowcell announced that it had readied a variably controllable flow cell, allowing it to drop the supercapacitors it had previously relied on to store energy and regulate current flow, saving both weight and money.

It pointed out that supercapacitors are very expensive and comparatively heavy. The breakthrough with the new low-voltage flow cell drive in the Quant 48Volt is that it will no longer require supercapacitors.

Nanoflowcell packages the new 48V technology inside the Quant supercar concept that first hit the scene back in 2014, creating a car with more unbelievable numbers than ever.

The Quant 48Volt has an all-wheel-drive layout of four low-voltage motors, teaming up to create 751 horsepower. The motors have been redesigned for the latest concept car and rely on a solid aluminum net structure in place of the copper windings familiar in electric motor design.

Nanoflowcell said that it reduces the volume, weight, and cost of the motor while also making series production simpler.

The juice spinning those motors comes from the flow cell, where it’s the result of the electrochemical reaction of two electrolyte solutions separated by a membrane. Nanoflowcell explains how it optimized the process in its 48Volt system.

The big selling point of the low-voltage electrical system is that it makes the vehicle safer.

The Quant 48Volt appears to wear a shade of bluish-gray close to that of the original 2014 Quant E but gets some copper-colored jewelry running down its sides.

The face gets a more vertical set of slats across the intakes, along with copper-colored trim at the sides. That look is repeated at the rear, where copper outlet surrounds split up the fascia.

The interior has also been updated, with newly-colored two-tone seats visible through the open gullwing in one of the pictures Nanoflowcell released ahead of the debut. 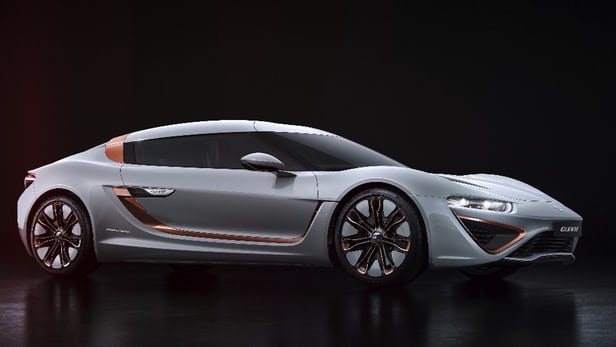 The key to the new Nanoflowcell fuel cell is that it runs at low voltage. The fuel cell claims to be the lightest, safest, most environmentally compatible, and economical powertrain for EVs out there. The show car is a prototype and there is no word on when it might hit production, details Geeky Gadgets.

Nanoflowcell has been touting its electrolyte-liquid-powered sports cars.. The Liechtenstein-based company is developing an engine powered by batteries that run on electrolyte liquid, otherwise known as flow batteries.