It may be a soft sell for interested consumers to bundle the new Asus ZenWatch 2 with the many variants of the Asus ZenFone 2 now out in the global retail markets, but according to Asus executive Jonney Shih, the second-generation Asus smartwatch is a perfect companion to a smartphone.

Shih went on to explain that as a companion device, the central processing unit and operating system of the Asus ZenWatch 2 still has a lot of room for improvement. He believes that those two main components of the smartwatch running on Android Wear can still be simplified so that its battery life can last up to seven days, details Digital Trends.

The existing Asus ZenWatch 2 has a battery life that last for four full days before requiring a charge, making its battery life as one of the best, if not the best in the market today.

It seems that the Asus executive is looking to further improve on perfection, although his idea seems feasible since the Taiwanese tech company has already done it with the VivoWatch, which it launched early this year. The VivoWatch runs a simpler operating system but boasts of a 10-day battery life.

For its retail price of $130, the Asus ZenWatch 2 appears worth it especially those who are looking to bring in an Android Wear device into their life for the first time.

It’s definitely cheaper than the Motorola Moto 360, but it really looks good. Though it is not yet in the caliber of a James Bond wrist phone, there is a good chance that Asus and other smartwatch makers would soon come to that in the very near future.

It’s an entry-level smartwatch so for those looking to have a gadget for fun, then the Asus ZenFone 2 is the best device to start with.

The Asus ZenWatch 2 comes in two sizes. The larger one measures 49.9 mm x 40.7 mm while the smaller one shaves a good three to four millimeters from the dimension of the bigger version. But the display of the smartwatch is considerably smaller at only 1.63 inches x 1.45 inches.

The smartwatch has all the typical amenities a user would expect from a smart wearable including Bluetooth 4.1 and Wi-Fi, onboard sensors that detect user gestures and movements, and even water-resistant too, details Gizmodo.

The Asus ZenWatch 2 is powered by a Qualcomm Snapdragon 400 processor, which is basically the same chipset being used by many Android Wear smartwatches currently in the market these days. The entire assembly is encased in a rectangular bubble made of hard Gorilla Glass so the smartwatch really feels solid and scratch-resistant too.

It comes in silver, gunmetal gray, and rose gold color options, and the user can actually match it with a range of bands, some of which are premium leather.

Despite the massive bezel that surrounds the screen of the Asus ZenWatch 2, the body looks slim and very stylish.

The wonder of the ZenWatch 2 battery life 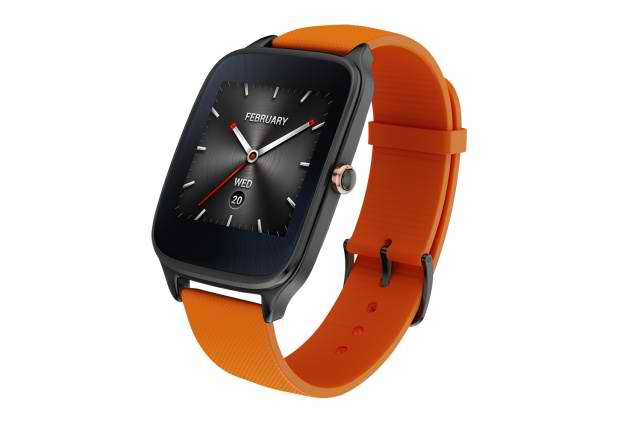 As it is, the main selling point of the Asus ZenWatch 2 is its superb battery life which has an astonishing longevity that most critics laud.