Hollywood veteran action star and former California governor Arnold Schwarzenegger has officially endorsed Ohio governor John Kasich to become the official Republican candidate in the upcoming primary and also wants him to become the next American president after Barrack Obama.

Some may have been thinking that Schwarzenegger would be endorsing front-running Donald Trump since he will be replacing him in the upcoming Season 8 of “Celebrity Apprentice” on NBC in the coming spring. But Schwarzenegger made his own choice.

Schwarzenegger has not commented on any way on Donald Trump but his endorsement of Kasich comes as the Republican Party is having quite the panic attack over the spectre of a Donald Trump-topped GOP ticket in the coming fall, notes Deadline.

In a Snapchat video posted on March 6, Schwarzenegger said that he wants John Kasich to be the next nominee of the Republicans and also to be the next president of the United States.

Later on in the same day, he joined Kasich at an outdoor rally in Columbus, Ohio campaign stop. He told the audience at Ohio that when John Kasich went to Washington, the governor kicked some serious butt. He said Kasich was an action hero when he went to Washington.

All praises for Kasich’s accomplishments

Schwarzenegger went on to say that the American people need John Kasich to take charge and be positioned at the White House.

For his part, Kasich also regularly mentions Schwarzenegger on his campaign trail by telling crowds and reporters that when he complained to the Terminator about negative attacks, the former California governor just told him to love the beatings.

At the moment, Kasich is currently campaigning in his home state, which he said he really needs to win to move on. The primary in Ohio is set on March 15 and the winner will get all of the state’s 66 delegates. He previously said that if he does not win the Ohio primary, he will opt out of the presidential race.

During the rally at Ohio, Kasich also boasted of a jacket that Schwarzenegger gave him years ago and showing it to the crowd. He said that he is officially the Terminator 2, the Governator 2 and that he slept in the jacket for the first month.

Late last year, Arnold Schwarzenegger attended the climate conference held in Paris, France and he immediately took to social media to post his position about the need for people to plan for their future and include clean energy with it.

The “Terminator” actor said he does not care what people think about climate change whether they agree with the scientific findings or not, but there lies an urgency for clean energy as the conference clearly cited that seven million people die every year from pollution.

Schwarzenegger used his Facebook account to express his sentiments and his goal of pushing for a clean energy future.

He said that the seven million deaths from pollution every year is more than the figures from murders, suicides, and car accidents combined. 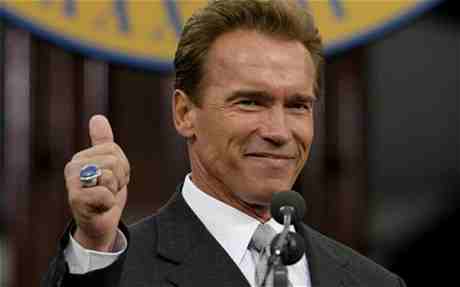 The person would not be allowed to turn the car engine off or use a gas mask while in the room. He theorized that it is likely that everyone would choose door No. 2 because door No. 1 is obviously a fatal choice.