Ariana Grande is not a stranger to the television, or the news and most people older than thirty might know her music and the fact that she is very difficult to deal with. Of course, that information is only coming from the news that you read about the 22-year old American singer/actress. She started her career back in 2009 on Nickelodeon, just like many other young stars that we see today. She quickly rose to stardom after leaving the network and starting her singing career.

Songs hitting the top ranks of the Billboard music chart and staying there for weeks were common for the first couple of albums. She has been on a world tour and even guest starred on television shows like Scream Queens. Her third album was released last year and that came a long with a holiday album titled, “Christmas & Chill”. Awards include American Music Awards, Music Business Association, MTV Music Award, Grammy nominations and MTV Europe Music Awards.

Being at the top of your game includes being part of the headlines around the world each week. This week is not any different as Ariana Grande made a couple with one of them showcasing her care for new boyfriend, Ricky Alvarez. The singer is huge on all of the social media platforms and she took to Snapchat recently to show off some photos with her new man. It was rumored that she found a boyfriend to spend time with, but this puts the confirmation on that.

Hugs and kisses galore, the images that the singer posted online revealed her true feelings for Alvarez. In the first image, you can clearly see Ariana Grande hugging someone that is turned away from the camera. The next shows her putting a nice little kiss on the cheek of the mystery man. Shortly after that you see another image of Alvarez with lipstick on this cheek with the caption, “guess whose lips”. Fans are not going to worry about the use of grammar in this case and are just going to run with the news. 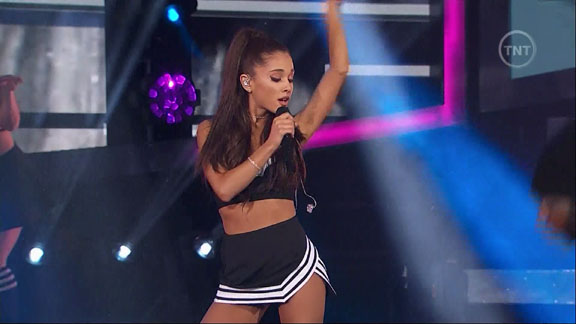 Up to this point, Ariana Grande did not have any public confirmation that she was dating anyone. Back in August, there were a couple of outlets that reported the two were getting closer, after Ariana met Ricky during her Honeymoon tour. According to reports, the two have been friends for sometime before the relationship grew to the romantic stages and that she could not “be happier”. Of course, those are the main phrases used in the first few months of a celebrity relationship. Only time will tell where it will all go with the two, but for now, Ariana Grande is back in the news.