Around ten years back, Dannielynn Birkhead lost her mother at the age of 5 months. The daughter of Anna Nicole Smith, who has a larger-than-life persona is totally unmatched by any other pop icon of today. She has lived the majority of her life without her mother or any motherly figure alongside her.

She has been relying on Larry Birkhead, to perform the roles of both parents at once. At the age of 10 years, the similarities between Dannielynn and her mother are quite striking. Larry hasn’t been capitalizing on the late Playboy model’s swift rise and eventual sudden fall. Instead, he has dedicated his whole life to ensuring that his young daughter lives a normal life. In honor of Anna and the legacy she left behind, let’s take a look at how Dannielynn has been growing up over the years.

On 7th September 2006, Smith gave birth to her only daughter in the Bahamas, who was named after her first son, Daniel Wayne Smith. After three days, the 20-year old died from a drug overdose while visiting Anna and his newborn half-sister.

During an interview with Entertainment Tonight after the demise of Daniel, Anna compares the tragic news to being ‘Punk’d’ and also reported it to be the lowest point in her life. After a few weeks, Howard. K. Stern and Smith, the attorney who was originally named on Dannielynn’s birth certificate, had their vows exchanged during a commitment ceremony which was held on the 41-foot catamaran located off the coast of Bahamas.

At that time, Anna’s attorney told People magazine that the family was in dire need of a little adrenaline boost since, in their life, things have been rather disturbing and wildly hectic so recently. After five months, on 8th February 2007, Anna was found dead in a hotel room due to an accidental overdose.

During Entertainment Tonight’s final interview, which was filmed days before she passed away, Howard and Anna flew to Florida to pick up a new boat. They wanted to take Dannielynn for a ride in the ocean. The wake of Smith’s funeral was held in the Bahamas three weeks after her death. It featured a highly publicized paternity battle over Dannielynn, which had the media captivated for weeks in 2007.

After DNA testing, it was proved that Birkhead is Dannielynn’s original father, and after a press conference in April 2007, Larry excitedly told the reporters that he hates to be the one to say it, but he told them so. Soon later, the father and daughter left the Bahamas for Louisville, Kentucky. It is where Anna Nicole’s daughter would be raised ultimately for the next decade.

Birkhead shared with the media that it felt great to be home. He said that he couldn’t wait to relax and then horse around with their extended family, including Dannielynn. During the same month, Larry and Dannielynn appeared on OK! Magazine’s joint cover. 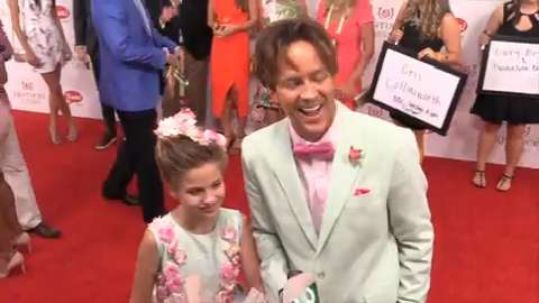 It was the 7-month old child’s first photoshoot. After Birkhead enjoyed his first Father’s Day in 2007, both of them returned to OK! for another photo shoot, and an interview was included as well.

Birkhead was doing great with introducing Anna Nicole’s legacy into her daughter’s life. According to him, he showed her Anna’s pictures all the time, and she usually grabbed them. When he shows her photos of Anna on his Blackberry, she kisses the phones and attempts to put it in her mouth. He explained that she doesn’t do that with other photos and that makes it quite special.