Four episodes into its debut season, “24: Legacy” the spinoff of the hit American crime drama TV series “24,” is off to a blazing start on Fox, as expected by viewers and critics.

Its fourth episode, entitled “4:00 pm to 5:00 pm,” showed lead star Eric Carter, played by Corey Hawkins, coming to the realization that he is running out of people he can actually trust.

Just like its parent series, the question of trust is a throughline for the majority of the characters of “24: Legacy” and their plotlines, notes Screener.

The episode featured the death of Ben Grimes, played by Charlie Hofheimer, who was the best friend of Eric Carter. The death of Ben did provide “24: Legacy” with a real ‘didn’t see that coming’ moment.

The action begins with Nilaa finally being vindicated. When Rebecca notifies her that she was set up, Nilaa rightfully gets a little sassy. She might be free now, but she also realizes that her reputation will never be the same again.

While it’s not much consolation, Rebecca does tell her that John never lost faith.

CTU is in panic mode trying to track down Carter. As Rebecca lies to Mullins’ face, saying she didn’t help Carter, she gets a call from the fugitive.

He may be on the run, but Carter takes control, telling Mullins to have a team ready to track his location. Before the conversation is over, Mullins does his best to convince Carter that he can’t listen to Ben.

Back at terrorist HQ, Jadalla has gotten word that the corrupted flash drive did contain one of the sleeper cells. Kusuma thinks they should still strike, while Jadalla wants to wait for all 15 cells, declaring that it how they would bring the country to its knees.

It was a perfect segue to what is surely one of those sleeper cells. As Khasan and Amira head home after taking care of Drew, the older brother tries to cheer up his sister.

As John could attest, that’s never a good thing. Amira is happy to see her father, Khasan, who’s convinced that the drop-in is no accident.

Having just escaped death, Isaac is on a war path. He thinks more people were in on Jerome and Aisha’s plan to betray him, and he wants everyone’s cell phones. Nicole is nervous, prompting a call to Carter in hopes that her husband will come to get her, notes Entertainment Weekly.

The best he can do is tell her to go to Christine. Nicole is confused because she thought it was all over. Once she hangs up, one of Isaac’s guys comes in, begging her to talk some sense into him.

While loyalty is one thing, but Carter’s knack for sticking by his Army Ranger buddy, Ben Grimes, no matter how many times the man seems to mess up, was a little frustrating for viewers of “24: Legacy.”

There’s a moment in the episode where arms dealer and unofficial James Bond villain, Gabriel, played by Andrew Howard, hands Carter a gun to put his friend out of his misery.

Not for nothing, but if it were Jack Bauer, the lead character played by Kiefer Sutherland in “24,” he wouldn’t have even hesitated. Unfortunately for Ben, Gabriel’s henchmen did the dirty work anyway.

While the first three episodes of “24: Legacy” saw the TV series groping for form despite a rather promising start, the show got its bearings and find a good footing on its fourth episode. 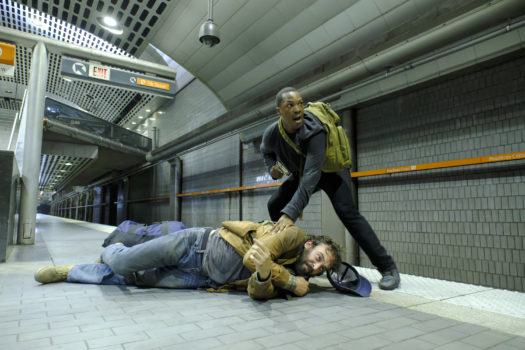 After watching the interaction between Isaac and Nicole, viewers now believe that here is no romance in the cards between the two.

Causing physical harm to Carter’s wife will probably come back to bite Isaac and it would be interesting to find out if Eric will be the one doing the biting.

And speaking of Isaac, even though Nicole tipped him off to the pending coup among his own people, the lack of trust is quickly growing in his compound.