In addition to the fact that about one-third of Americans do not know that Obamacare and the Affordable Care Act are one and the same, the majority of them have shunned the all-important and necessary vaccinations that put themselves and others around them at health risk.

Sandra Fryhofer, liaison for the Advisory Committee on Immunization Practices (AICP), says that vaccination coverage rates for American adults are abysmal and there is a huge room for improvement.

Fryhofer is an Atlanta physician and adjunct associate professor at Emory University School of Medicine.

She pointed to racial and ethnic disparities in vaccination rates, with whites more likely than all other groups to be vaccinated. She also noted that adults with health insurance are two to five times more likely to be appropriately vaccinated, reports Reuters.

She explained that vaccinations not only protect adults, they also protect those around them.

She was also a member of the working group that came up with the new guidelines from the ACIP that was published recently in the Annals of Internal Medicine.

According to the latest available data, about 44% of American adults over age 19 had a flu shot; 20% had a Tdap vaccine, which protects against tetanus, diphtheria, and pertussis; and 20% of 19-to-64-year-olds at risk of pneumonia had that vaccine, compared to 60% of those over 65.

Just 27% of those over age 60 were vaccinated against herpes zoster, which cuts the risk of shingles in half.

Dr. Walter Orenstein, associate director of the Emory Vaccine Center in Atlanta, described adult vaccine uptake among American adults very disappointing and said it is substantially below the rates achieved for most recommended vaccines for young children.

He said that adults should be vaccinated against influenza annually, receive a booster of a tetanus vaccine every 10 years, two different types of pneumococcal vaccine when they turn 65, and a vaccine to prevent shingles when they reach age 60.

If a person was not vaccinated as a child, he may need additional vaccines, added Orenstein, who was not involved in the development of the new guidelines released by AICP, details Managed Health Care Connect.

Both Fryhofer and Orenstein pointed out some of the important changes made in the 2017 guidelines, including the recommendation that everyone aged six months and older should still be vaccinated against the flu, even late in the season, but should not use the nasal vaccine, which has been found not to work very well.

Another new guidance says that young people vaccinated against human papilloma virus (HPV) before age 15 need only two vaccine doses, not three, given at least five months apart. If the person is 15 years or older and has not been vaccinated before, he still needs three doses. 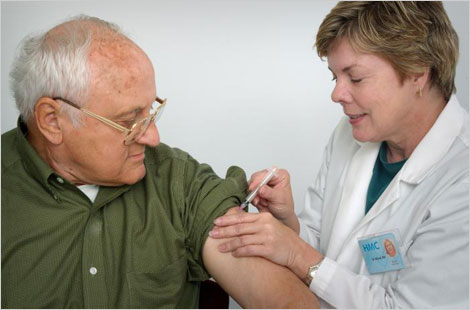 People with liver disease should get the hepatitis B vaccine, which also protects against liver cancer. And those with HIV need two doses of a meningococcal vaccine, and doctors should use the same vaccine for all doses.

As to how well an individual responds to a vaccine, whether or not it works, depends on the health of their immune system, Fryhofer explained.

She noted that the very young, the old, or anyone with a weakened immune system, including pregnant women, do not respond as well.