Kim Kardashian appears to be tired of being a brunette that she just dyed her hair platinum blonde.

But for the first time in a long while, and quite surprising too, the Hollywood queen of selfies did not post a picture of herself sporting her new do on social media, the way she usually does every time there’s a change in her looks.

Many of her fans were shocked when she finally stepped out in public on March 5 at the Balmain show during the Paris Fashion Week debuting her platinum blonde do. Some say that it looks good on her but many say that she actually looked like somebody from an anime movie, notes MSN Entertainment.

But the website of her show’s network, E! Online thinks the reality star really looks good with her latest blonde ambition.

It is still not clear what was the reason for the “Keeping Up with the Kardashian” reality star to dye her locks with platinum blonde but a source said that Kim just did it for fun. She just wanted a change, that’s all, added the source.

Last year, the 34-year-old Kim Kardashian also went blonde but that did not last long because she only wore a wig that time. But she posted images of that change on her Instagram last year.

In 2013, three months after giving birth to her daughter North, the reality star also had her hair dyed to light blonde which was widely supported by her husband.

Andy Lecompte Salon colorist George Papanikolos revealed back then that Kanye West loved the change in the hair color of Kim because he has been cheering her to go blonde. Kim’s 2013 blonde look did not last long as she changed back to her original brunette color do a few months later.

She also dyed her hair blonde in August 2012 but that also did not last long.

Kim Kardashian, rapper-husband Kanye West and momager Kris Jenner sat in the front row of the Balmain show during the Paris Fashion Week where stepsister Kendall Jenner walked the runway.

The latest change in the hair color of Kim Kardashian comes after her recent interview with People magazine about laser hair removal. She mentioned in the interview that she has the hairiest forehead that people could ever imagine and that she is often annoyed with it. The story will be coming out in the March 16 issue of People magazine.

Kim Kardashian also recalls that during her high school days, she just had to wax her forehead because it just had so much hair on it. She disclosed that she had the craziest and hairiest hairline back in 2007 or 2008 so she had to laser it. 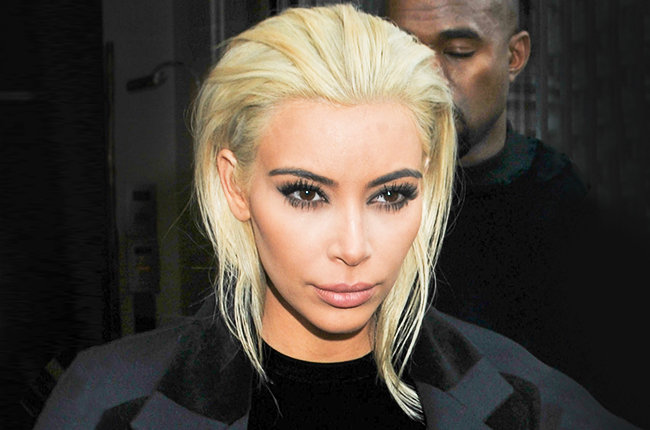 She did not change the shape and only had the baby hairs on her forehead removed. Kim also said that during her photo shoots then, people would just Photoshop her image just to get rid of the hair on her forehead.