Detroiters is a show about two second-rate ad men from the motor city of Detroit who are quit dismal about their jobs. They are Tim Cramblin, played by Tom Robinson and Sam Duvet, played by Sam Richardson. They are both business partners, best friends, brothers-in-law and most of all, proud Detroiters.

They make rather cheesy commercials intended for the local market, advertising for various worthy businesses like the optician down the street and the local hot tub warehouse. Sheila, played by Pat Vern Harris, is their secretary and she is a white-haired relic of the Mad Men era who are of the opinion that she is a sexy blond who engages in flirtations with her bosses.

She also confuses Tim regularly for her father, Hank. He is a respected ad man who founded the company and due to overwork, went insane. Chrissy, Sam’s sister, married Tim, much to Sam’s irritation but the partners didn’t allow married bliss interrupt the closeness they share. They live pretty much next door to each other. Sam lives in a crumbling house which he intends to flip.

In the midst of all the interconnected chaos, Detroiters gets its comedy from Sam and Tim’s carefree nature. They love their city and their jobs. They love each other and have a codependent affection which is further reminiscent of llana and Abbi in their sister show, named Broad City. Detroiters offers a state of mind instead of serving up a plot.

During the pilot’s first few minutes, Tim and Sam put steak sauce on their neckties and swipe a check from another patron to make it look like they are accidentally bumping Chrysler Rep (played by Jason Sudeikis, an executive producer) at a steakhouse. They need to drive the point home too many times and they end up trampling all over their scheme.

In the Detroit metro area, Sam and Tim are like happy kids present in a candy shop. With brilliantly timed editing, their enthusiasm becomes more hilarious. Many scenes in the show are immensely idiotic but very naïve and people find it hard to stop laughing.

With the use of seamless rhythms, Robinson and Richardson play off of each other. Both of them get into their roles as Mad Men hucksters. Some of the best bits of the show are either very gross commercials or incredibly bad pitches for the commercials. They offer opportunities for the guest stars of the show to wholeheartedly commit to an awesome hit.

Detroiters are clever enough to guide the audience to a joke setup without letting them know what’s about to happen. In the premiere, Steve Higgins plays hot tub kin, also known as the announcer of Jimmy Fallon’s ‘The Tonight Show’.

He delivers a monologue about having sex with his wife, which is so dedicated and committed that even Sam and Tim are dedicated. In another episode, after an absurd pitch from Ned, the security guard, the two leads look like they are about to crack themselves up. 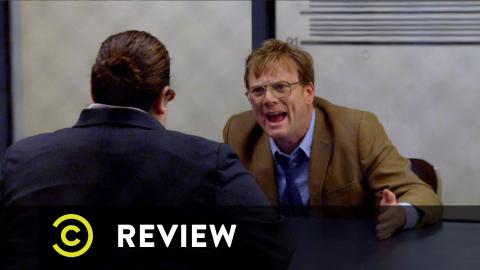 Of all the episodes that were sent to the critics, the premiere appears to be the strongest, mainly because Sudeikis is the perfect serious foil to Robinson and Richardson. He isn’t a regular cast member but as suggested by the press materials, he will take the role of the Chrysler rep.

The show is a weirder journey without him, one which ends up de-emphasizing the story for the more elusive quality of the atmosphere. However, it is a bizarre and awesome joy to watch the show. Detroiters is a rare new sitcom with as much heart and soul as the wackiness and jokes.