Hyundai seem to have really done a good job with the latest release in their Genesis line, as the 2015 model has been enjoying a lot of positivity from critics so far. The car has already been named “Best Luxury Car” by the Hispanic Motor Press Awards, and has additionally been nominated for “Best Car to Buy”. Those who have been following the development of the new model should not find this surprising at all, as Hyundai have been discussing in detail how much effort they have been putting into their latest Genesis.

The interesting thing about the “Best Luxury Car” award is that the model is actually not quite entirely a luxury model, at least not according to all definitions of the word. Some critics have been putting it closer to the mid-range category when discussing the car’s specifications, looks and comfort, but it’s still not a cheap vehicle either. And the finely crafted exterior design makes this more than obvious, especially to true fans of beautiful car bodies.

It’s not surprising that the new Genesis has been enjoying the favorable reviews it’s getting, as the designers behind the car have obviously decided to make some radical changes in their approach to its visuals. The car is a serious improvement in terms of appearance for Hyundai, and even old-time fans of the brand have been expressing difficulty in believing that this model was designed by their favorite company. Of course, if one looks closely, some common trends from Hyundai’s designs can be seen here and there, and the car seems takes some subtle inspiration from the company’s recent models, particularly in the front.

The $41,450 price tag that the 2015 Hyundai Genesis is available at has been the subject of a lot of discussion, as it’s not often that a car with such specifications comes out at such an affordable price. It’s not a budget vehicle by any means, and those looking to get a cheap car, more interested in its actual specifications, should probably look elsewhere. But buyers who’re looking to get a little extra luxury in their everyday drive will definitely appreciate everything that the new Genesis brings to the table. 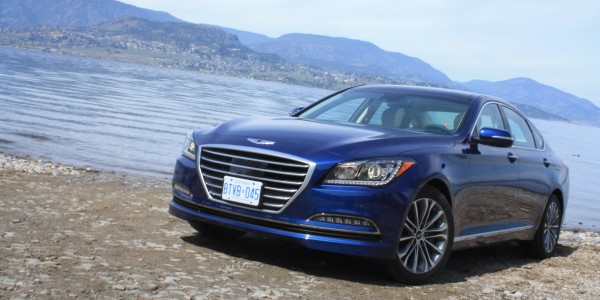 One of the aspects that critics have been particularly fond of, is the intuitiveness and overall comfort in driving the car. Assisted by multiple types of gadgets and special features, the 2015 Hyundai Genesis is not an ordinary car, and has been stated to be a pure pleasure on the road. According to some reviewers, it’s particularly good for long-distance drives, e.g. between cities, as the extra navigation and control features make it a pleasure in such conditions.