Though they seem quite similar on the surface, and they definitely do share a lot of gameplay ideas, “Boom Beach” and “Clash of Clans” are actually two very different games, and each of them approaches the basic gameplay idea from a completely unique angle. Both games have their own respective following of fans, and some people even enjoy the two games alike, but for those who’re yet to join the fun, it might be worth going over a list of some of the basic features that differentiate the two titles.

For players who enjoy collecting loot and upgrading a base character, “Clash of Clans” is arguably the better experience. It’s simple, yet quite addictive when it comes to collecting loot, and even though “Boom Beach” also has its looting aspect, the majority of those rewards come from fighting against other players in that game, which is not as appealing to everyone.

Players who like to be a bit more strategic in their assaults might also enjoy “Clash of Clans” better, as the game allows for more interesting combinations of units. “Boom Beach” is more straightforward and mostly requires the player to focus on a small number of units without much diversity between them. It’s not that strategic, admittedly, but the main focus of the game is not on dominating the enemy through deep tactics in the first place.

“Boom Beach” does several things better than its competitors, according to most accounts. It’s a more dynamic game when it comes to the building aspects, as everything takes less time and the player usually finds themselves actually performing some kind of action during the majority of time (as opposed to the longer waiting periods in “Clash of Clans”).

Diamonds can also help in this regard, as they speed up the production time and aren’t very difficult to obtain. All in all, the game makes it easy to set up an impressive base. Players also have access to the Gun Boat, which changes the gameplay quite a bit and adds an extra layer of depth. Many players have been praising this feature alone, claiming that it adds a lot to the game’s complexity and makes it much more interesting as a whole. 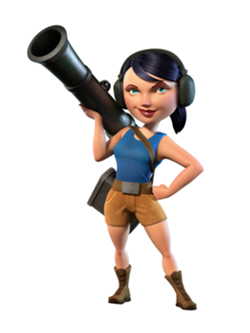 There’s also a little more freedom in “Boom Beach” in the construction department, as the game doesn’t have the limiting walls of “Clash of Clans”, a feature that many players have been displeased with ever since its original inception in the alternative game. While the game does have its limitations on the building aspect, it approaches that in a different way and gives the player more options as a whole, according to most critics.