Going to the office to work has always been a norm for 95% of people all over the world and it would be interesting if there would come a time when employees would be scared of going to work one day.

It seems that would be the hypothetical end result for those who would watch the upcoming suspense film “The Belko Experiment” due to hit theaters on March 17.

Written by “Guardians of the Galaxy” Director James Gunn, “The Belko Experiment” is a serious killer of a movie both figuratively and literally.

The trailer of the movie which was released by James Gunn on his Facebook page recently was pretty solid it actually sent chills to the nerves of those who were able to see it. It also stayed to its earlier hype of corporate office gore at its horrific best.

He wrote in the post that the trailer was with a bit of more Marty Espenscheid AKA Kraglin from “Guardians of the Galaxy” AKA Kirk from “Gilmore Girls” AKA his idiot brother, Sean.

Some critics are actually describing the movie as “The Hunger Games” meets “The Office,” resulting to the “Battle Royale” in a building, notes Comingsoon.net

It is also quite interesting to note that Sean Gunn, James’ brother, is part of the movie. He plays one of about 80 white-collar American workers of a corporate office building in Bogata, Colombia.

He is caught getting stoned on the roof with a few buddies, a fact which will likely work against him in the movie.

One day all doors and windows are blocked when an announcer comes over the intercom to ask an impossible decision of the employees – either choose 30 people and murder them yourselves or do nothing and the overseer will execute 60.

It was obviously a twisted social experiment and it’s really a deadly game of kill or be killed, true to the description that it is “The Hunger Games” in an office environment.

Emphasis on the script

Significant emphasis has been placed on James Gunn’s script, but Greg McLean, who helmed the “Wolf Creek” horror movies and the upcoming “Jungle” with Daniel Radcliffe, is sitting in the director’s seat.

The film premiered at the 2016 Toronto International Film Festival on September 10, 2016. The film is scheduled to be released on March 17, 2017, in the United States, by Blumhouse Tilt and Orion Pictures. 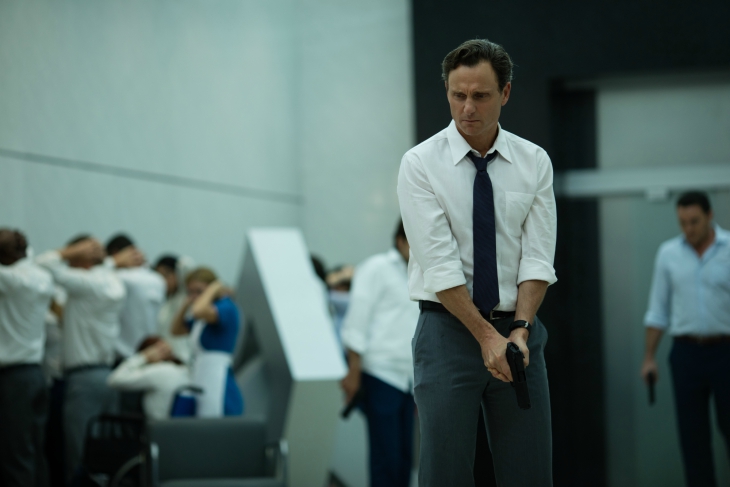 The production companies for the film are Metro-Goldwyn-Mayer and the Safran Company and will be distributed by Blumhouse Tilt and Orion Pictures.

On March 31, 2015, James Gunn posted on Facebook about his upcoming thriller film to which he wrote the script and was intended to produce along with Peter Safran. Metro-Goldwyn-Mayer was set to finance the film, while Greg McLean was set to direct.