British actor Simon Pegg, who wrote the screenplay for the third installment of the “Star Trek” reboot film franchise officially titled “Star Trek Beyond,” revealed in a recent interview that the upcoming film combines the philosophies and tenets of the Star Trek universe with bigger set pieces and exciting stuff.

The actor said that the upcoming movie will see Captain Kirk and the guys doing stuff that fans have not seen them doing before. But it would not be at the expense of other stuff.

Pegg also assured fans that “Star Trek Beyond” will be very intelligent as well as a hopeful projection of their own futures which he said is something that they have to hang on to.

He also says that being given the keys to Star Trek universe is an extraordinary privilege for him, a self-confessed “Star Wars” fanatic, notes the Den of Geek.

The comedian-actor said that getting to write a “Star Trek” film was daunting and stressful at times, but it became enormously fun for him.

With a July 22, 2016 release date, “Star Trek Beyond” is obviously now in its post-production phase after filming has been completed a few months ago under the direction of Justin Lin. The screenplay was co-written by Simon Pegg and Doug Jung.

Pegg also revealed that he has already seen the early cuts of the film and he claims that he liked what he saw. He also expressed excitement when he said that he can’t wait for people to see the movie when it hits global theaters.

He was also quoted as saying that he knows that Star Trek means a lot to a lot of different people. So the upcoming third reboot movie and the 13th film of the franchise overall will be something that everyone can enjoy as well.

He added that people will also look at the means of the writing of the screenplay as well, which he said is an invitation to the un-inducted of the Federation Fan Club. He said that it will also be a tribute to those who have been watching the franchise for 50 years and those who know and love every element of it, notes Slash Film.

Not a ‘Fast & Furious’ movie in space

Pegg also clarified that “Star Trek Beyond” will not be what some critics are calling as “Fast & Furious” film in space because it is helmed by Justin Lin. It can be recalled that Lin steered the “Fast & Furious” franchise to its most successful movie to date in “Fast & Furious 7” released in April last year.

The actor said that Justin’s history as a filmmaker started off with a Sundance movie called “Better Luck Tomorrow.” Pegg said that the director is a smart and sensitive guy. He adds that Justin is not just the car chase guy but someone deeper and he showed it with his direction of “Star Trek Beyond.”

Meanwhile, a new image from the set of the movie showed Zachary Quinto, who plays Spock, and Karl Urban, who plays Dr. McCoy talking to Sofia Boutella, who plays Jaylah, the team’s mysterious ally.

Jaylah’s role in the film remains a secret but critics are assuming that her character will have no love lost for the villainous Krall, to be played by Idris Elba. She is seen in the photo heavily armed but hanging out with the crew of the “USS Enterprise.” 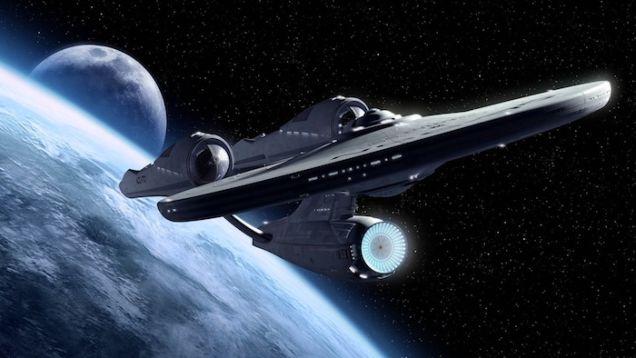 Last month, reports came out that the movie has taken in a major new cast member that prompted Director Justin Lin to do some reshoots to film the scenes that include the newest character addition to the movie.

Apparently, Oscar-nominated and Emmy-winning actress Shohreh Aghdashloo, known for her movies such as “House of Sand and Fog” and “House of Saddam,” will be joining “Star Trek Beyond” and will take on the role of the High Command of the Federation.