Scarlett Johansson came to the rescue of veteran actor John Travolta after a picture of him and the actress during the Oscar red carpet made the rounds in the social media where he was overly criticized for being a little too cozy and fresh with the woman.

The picture showed Travolta attempting to kiss Johansson while on the Oscar red carpet and the actress seems to have shunned the actor.

The actress who plays the role of Black Widow in the upcoming “Avengers: Age of Ultron” says that John Travolta was a class act. She denounced the contentious image featuring the two of them as an unfortunate still frame that does not reflect a totally sweet and welcome encounter, notes The Advertiser.

In an interview by the Associated Press on February 26, Scarlett Johansson said that there is nothing at all strange, creepy or inappropriate about John Travolta, obviously defending the actor from the unnecessary criticisms that he has since gotten when the image made the rounds on social media.

She added that the image only shows how people can be misguided, misinformed and sensationalized by the 24-hour news cycle. Johansson said that she has not seen John for so many years so it was a pleasure for her to finally see him again at the Oscars, details Yahoo! Movies.

Indeed, Johansson was correct because subsequent photos of John Travolta and the actress on the same Oscar red carpet already told a different story. The media just picked one photo and made mincemeat out of it.

John Travolta actually greeted Scarlett Johansson while at the Oscar red carpet on February 22 with a kiss and his arm around her waist.

Unfortunately, Travolta came in from the right side of Johansson while photographers were snapping in front of her. So she was caught in a moment of looking at the camera or being receptive to the kiss and the greeting.

She warmly received the kiss and greeting shortly from Travolta and the subsequent photos showed it too.

It was a double whammy for John Travolta during the Oscars as his face-touching gesture on Idina Menzel when he was called to co-present an award was also widely criticized on social media.

Idina actually introduced John as Glom Gazingo on the Oscars stage as a way of returning the favor to the actor when he introduced her last year as Adele Dazeem. 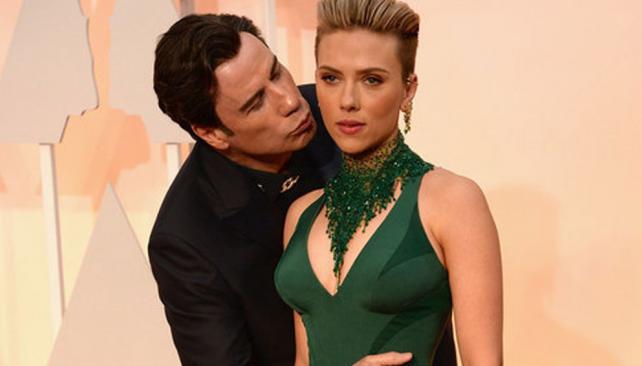 Travolta came to the stage and said that he deserved that, referring to how Idina returned the favor to his infamous goof up in last year’s Oscars. He also said to Idina that she being a darling, a beautiful and wickedly talented Idina Menzel and asked her if he finally got her name right.

Then Travolta cupped her chin with his hand that had the “Let It Go” singer feeling wickedly uncomfortable.