Ever since the launch of the Apple iPhone 6, it has been difficult for the gadget maniacs to keep their hands off the phone. Whether to shell their money on the Apple iPhone 6 or to wait it out with nails clenched between teeth for the Samsung Galaxy S6 has proven to be quite a difficult decision to make.

From what we have collected so far, the Samsung Galaxy S6 will be featuring a Super AMOLED screen, which will be bigger than that of Apple iPhone 6. Is this reason enough to justify your painful escapade to the launch of the S6? Read on to find out.

The war between Apple and Samsung has been wading through the ages and year after year we see the companies launch attack, after attack, after attack in the seemingly “peace loving” gadget economy. Apple has already played all its cards, and Samsung has nothing to lose now. The Koreans have decided to keep the hype up in the market till the actual launch of the phone, so whatever specs that you are going to read may truly be based on a collection of cumulative speculations.

Samsung’s “larger-than-5.5-inch” display is said to house a 4k resolution with QHD. This will put Apple’s retina display to ashes.

The Galaxy S6 will have a much sturdy processor – 64-b Qualcomm Snapdragon 810 processor with Adreno 430 GPU. We don’t even want to compare this and insult Apple’s chipset.

The Samsung Galaxy S6 will feature a fully metallic body, something close to the Alpha. This will be a good move from the Koreans as the world has been continually asking for it. We are not sure how much of a difference this will have on the weight yet, but it is sure to make the phone sturdy.

There is no point in arguing about the durability of the iPhone 6. After the recent #bendgate phenomenon of the 6 Plus, we are not sure how much of user expectation the Cupertino giants will be able to keep. This only time and tide will tell.

Speculating about the camera of the Galaxy S6, the Galaxy S5 already has a 16 MP camera, which is better than the Apple iPhone 6’s camera at a meager 8 MP. Taking this into consideration, it doesn’t matter if Samsung will give a 20.1 MP camera or a 16.MP camera; it is going to win the battle none the less. 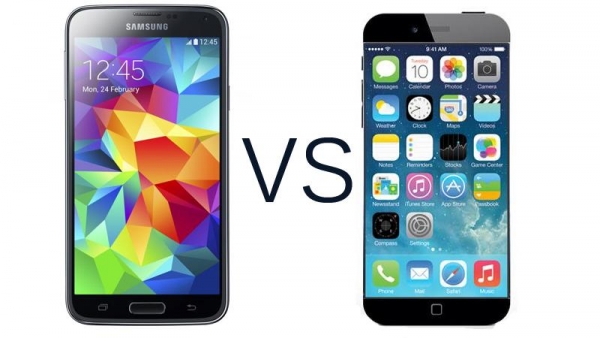 Both smartphones will be run the latest OS of the time for sure. We can easily expect the Samsung Galaxy S6 to run the latest Android L while the iPhone 6 already runs on iOS 8.1.

What is your take on this constructive criticism on Apple and Samsung? It is not hard to differentiate the winner here. Please let us know which phone you like and why, in the Comments Section below.