Oppo Find 7, Samsung Galaxy S5 and LG G3 are currently some of the best smartphones in the world. While Samsung and LG are the smartphones giants, Oppo is a Chinese firm that has gained a lot of popularity around the world with their high-performance devices within the budget segment.

Presently, a lot of companies like Oppo are producing devices that are being termed as ‘flagship-killers’. We saw this happen earlier with devices from OnePlus and Xiaomi. Let us look at how all of these smartphones stand their ground when their specs/features are compared.

The Oppo Find 7 has an IPS LCD capacitive touchscreen running a display resolution of 1440 x 2560 pixels on a screen measuring 5.5 inches. As a result, the screen has a massive 534 ppi pixel density. The screen is protected with Corning Gorilla Glass 3, supports Multi-Touch input and runs on Color OS user-interface.

Get ready for superior sound quality as this device comes with Oppo MaxxAudio Sound enhancement. The phone has an internal storage capacity of 32 GB that can be further expanded up to 128 GB. Under the hood, the Oppo Find 7 has a Qualcomm MSM8974AC Snapdragon 801 chipset with a Quad-core 2.5 GHz Krait 400 CPU.

It has an Adreno 330 GPU running on a mammoth 3 GB RAM. In the camera department, the phone comes with a 13 MP primary shooter with autofocus and dual-LED flash. It supports 2160p video resolution. The Oppo Find 7 also has a 5 MP secondary shooter.

LG G3 has a True HD-IPS + LCD capacitive touchscreen with 16M color definition. Having a screen size of 5.5 inches, it features 1440 x 2560 pixel display resolution with 534 ppi pixel density. The screen is protected with Corning Gorilla Glass 3. Furthermore, even this device provides a superior sound quality through the use of Dolby mobile sound enhancement. The device comes with two different variants with different RAM and internal storage.

The 16 GB variant runs on a 2 GB RAM while the costlier 32 GB version runs on a 3 GB RAM. It has a 13 MP primary camera with dual-LED flash and optical image stabilization and a 2.1 MP secondary camera. It runs on the Qualcomm MSM8975AC Snapdragon 801 chipset with a Quad-core 2.5 GHz Krait 400 and the same Adreno 330 GPU. 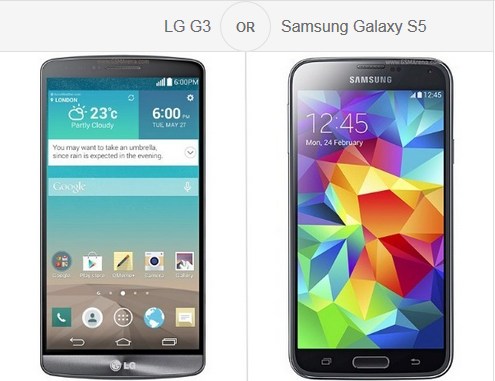 The Samsung Galaxy S5 is quite similar to the above devices in terms of specifications. All three smartphones feature the same 2.5 GHZ Quad-core Krait CPU and Adreno 330 GPU. However, the Samsung Galaxy S5 comes with a superior 16 MP primary shooter as compared to the G3 and the Find 7.

The only aspect where the Galaxy S5 can be considered to be inferior is with its display. It has a smaller 5.1-inch, 1080p display with a considerably lower 432ppi pixel density compared to the other devices.