There is a point in a movie series where it must eventually end because apart from being tiresome, the convolution of the plotlines no longer suit well with today’s generation of viewers.

That is why, the “Harry Potter” series already ended in the eighth movie, although the last movie was just an extension of the seventh film.

That is also the reason why “The Hunger Games” film franchise ended in the fourth movie, with the last film being a mere extension of the third film.

These days, if viewers and critics see that the franchise is extending the series for the mere sake of having one last squeeze at the box office instead of basing it on a finite storyline, the likely result tells negatively on the reviews and the box office take of the movie as well.

That is precisely the reason why the third movie of the “Divergent” franchise, entitled “Allegiant” bombed out at the box office last year. Apparently, critics and fans felt that the writers and the director overstretch the storyline too much that it was no longer as exciting as the first two films of the series.

The final movie of the franchise, “Ascendant,” which will hit theaters this June would be the defining moment for the series. If it bombs out again just like the third movie, the overstretch has become obvious. But if it redeems the franchise, then the writers and directors may have made some drastic changes to its already overbearing plotline.

The same is true with the “Resident Evil” film franchise starring Milla Jovovich and based on the Capcom video game of the same name. It’s supposedly final movie, entitled “Resident Evil: The Final Chapter” was just shown in theaters recently, and it seems that it has already milked the plotline so dry that another one would already get the viewers and critics throwing up.

Has had enough already

Even Milla Jovovich says that she has had enough of the “Resident Evil” film series. In a recent interview during the press tour for the latest film, the actress said that she sometimes feel that the series has been her whole life running, very similar to her Alice character in the movie, reports the Telegraph of UK.

She seems to hint that it is going to be the last for her in the series although that would still not stop the producers from doing several more especially if they see positive results on the official box office take of “Resident Evil: The Final Chapter”

Despite its title, there is actually no guarantee that “Resident Evil: The Final Chapter” is going to be the last movie of the series. It can be recalled that there was the “Friday the 13th, Part IV: The Final Chapter” shown in 1984. One year later, it was followed by “Friday the 13th Part V: A New Beginning,” which was followed by six more sequels.

Most critics also believe that it is time for Jovovich to hang up the Alice character for good as the franchise has already hammered a profitable formula into the ground, at least as far as novelty goes.

Far from adding up to a cumulatively epic saga, the storytelling is stuck in an overcautious feedback loop that a viewer could skip from film one to six and totally get the gist.

Borrowing some bits and pieces from other films

Jovovich’s husband Paul WS Anderson, who has directed all but two of the film series, does not need long to apprise viewers of the goings on so far.

Anderson borrows so many bits and pieces from James Cameron’s “Aliens” that viewers wonder if he’s seen some films such as “Terminator 2” and “Mad Max: Fury Road.”

The pieces are prime sources for a post-apocalyptic chase movie that winds up in a facility called the Hive, but Anderson’s magpie plundering is haphazard to the point of lunacy.

The movie is also deafening because every single thing that happens is cranked up to ludicrous, eardrum-shattering levels. A dot matrix printer gets set off in the dark, and it sounds like the planet is ripping in half. Hush and patience are simply not in Anderson’s vocabulary.

He bombards the viewers as if terrified of encroaching tedium, and the set pieces trip each other up in their sheer haste. 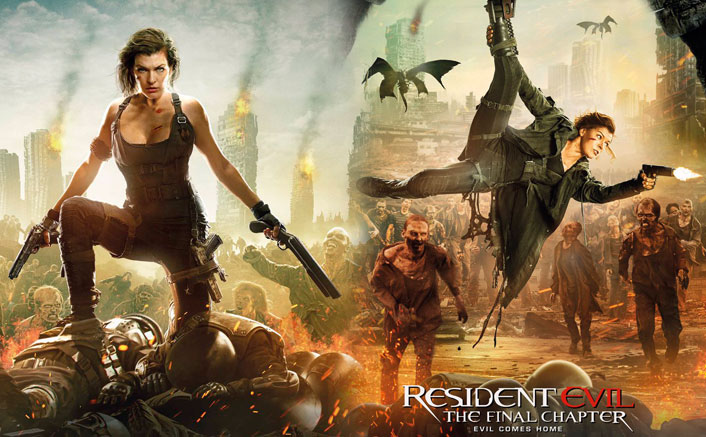 Casting has often been one of Anderson’s stronger suits. The underrated Fraser James, whose electric, gravelly voice is easily the best thing on the soundtrack, puts up a good fight in support, as the kind of gym-bunny rent-a-villain who wears sunglasses indoors and says nothing that isn’t sarcastic.

Jovovich, a theoretically interesting star given robotic tasks throughout, plays disabled, too, as an earlier incarnation of Alice is wheeled on in old lady make-up.