Last month, there have been talks and speculations on who will be the next Disney character who will be featured in the upcoming crossover action role-playing game “Kingdom Hearts 3” which is expected to be launched in November this year at the D23 expo in Japan before its subsequent release to the PlayStation 4, the Xbox One, and the PC early next year.

There have been rumors that it would be Captain America, who is from Marvel but is nonetheless under Disney Pictures as well as Queen Elsa of the very successful animated film in history “Frozen.” There was also speculation that it could be Darth Vader from the “Star Wars” franchise which is also Disney’s or any character from the recent animated movie “Big Hero 6.”

The dark horse of those rumors was that it would be a character from the movie “Tangled” who will join Sora, Donald Duck and Goofy in their quests.

Now it turns out that the dark horse among the rumors is the one coming to the game after all as game director Tetsuya Nomura confirmed it during the presentation of Square Enix at the just-concluded Electronic Entertainment Expo (E3) 2015, notes Engadget.

Game developer Square Enix has announced during its E3 presentation that it will be collaborating with “Tangled” for “Kingdom Hearts 3.”

Nomura explained that they want to polish up everything and ensure that it meets their own standards before they bring it to Disney for approval. The process now is quite different from before because the animation studios are already involved. He added that Square Enix wanted to make sure that they can realize the vision for the hair of Rapunzel in “Tangled” given its uniqueness before seeking Disney’s thumbs up for it.

During Square Enix presentation of the trailer of “Kingdom Hearts 3” at the E3 2015, it was clearly shown that the visual aspects of the game have greatly evolved a lot vis-à-vis “Kingdom Hearts 2.”

Even the particle effects within the battle have been improved. Placed against the sheer scale of it, a gamer would surely notice how vast the improvements have been made into the game.

The world of “Kingdom Hearts 3” may not be comparable to massively open-world game titles but it is nonetheless bigger than its first two predecessors.

Transitioning from one stage to the next has also become seamless according to Nomura because of the decrease in load times. In the previous games, gamers run to the end of an area and it would go dark before the next stage is unveiled. With “Kingdom Hearts 3,” the cut-scene has become instantaneous.

It has almost been a worthy tradition for Square Enix to introduce and include a Disney character or characters on its “Kingdom Hearts” franchise which originally featured the classic Disney characters Donald Duck, and Goofy as they join Sora in his quests. 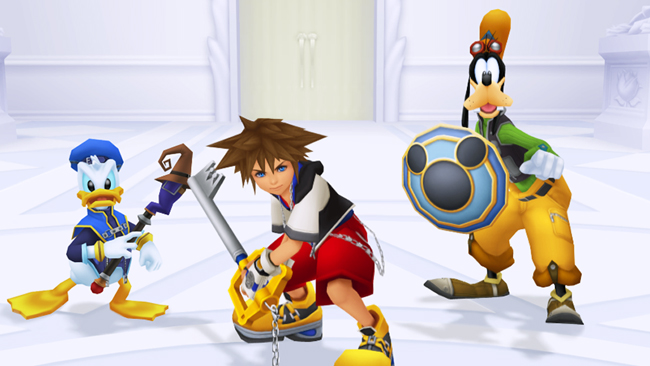 Now that it has already been confirmed that it would be Rapunzel of “Tangled” who will be the next Disney character who will be featured in “Kingdom Hearts 3,” the next question for gamers is who among the characters of “Final Fantasy” series will make the crossover to the game too.