Late in 2014, Sylvester Stallone confirmed that there will be a “Rambo 5.” In fact, several months after he made the announcement, reports started coming out that the movie shall have a title “Rambo: The Last Blood,” which was quite a fitting end to an action film franchise whose first movie had the title “First Blood.”

Subsequently, there were reports that started coming out claiming that Stallone has undergone training in preparation for his reprisal of the John Rambo role.

However, “Creed” happened. He was so deep and good in his acting in the movie where he reprised his Rocky Balboa role that critics noticed him. It was then that Stallone may have realized that he can be good in a movie without going into so much action. At 69 years of age, the actor is already concerned about how much his body can still take and withstand in those high-octane action scenes.

While his heart and mind are obviously willing, the body can only take so much and being one year short of 70, nobody will fault Stallone if he finally gives up doing action films.

The last go-round for Rambo

In an interview early this year, Stallone confirmed that the fourth film on Rambo shown in 2008 titled “John Rambo” was the last go-round for the character.

He said that he does not want to be like fighters who go back to the ring for one last round and gets clobbered in the process. He says that he will be leaving it to someone else, notes Joblo.

Stallone said that there is nothing more to pull out from the series and that he was very satisfied that the fourth Rambo film dealt with the Burmese situation, describing it as having one foot in a current event then, which was the longest civil war in history.

The veteran action star said that there is really nothing left. He said that when he was asked to do another “Rambo” movie, he said that if he can’t do better than what he did the last time, there is no use for doing another sequel. He believes that he cannot do any better than “Rambo 4” that is why he would no longer do a “Rambo 5.”

The character on the small screen

When he mentioned that he would rather leave the character to someone else, Stallone did not mean some action star pitching on his behalf to do “Rambo 5.” What he meant most likely is the Rambo TV series, currently in production and will hit Fox in October 2016.

It has been reported that Fox has ordered a script for a one-hour drama based on the iconic Stallone movie franchise.

Although Stallone would not star in the TV series, he will come in as executive producer along with Avi Lerner. The TV show will actually pay homage to the movies and it is tentatively titled “Rambo: New Blood,” reports the Lawyer Herald.

There is also a huge possibility that Stallone might reprise his role of the former Green Beret on the TV series but as of now, nothing has been officially decided.

It would be a good strategy since CBS already proved it with the network adaptation of the Bradley Cooper movie “Limitless.” The TV series of the same title earned high ratings in episodes where the “American Sniper” actor was featured. 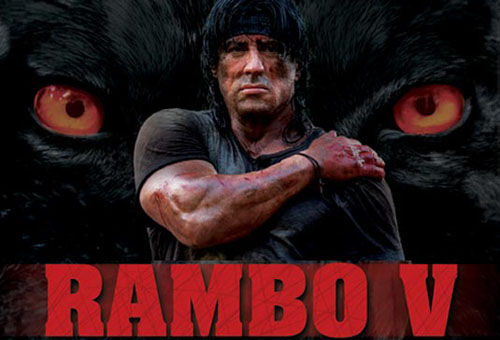 In terms of promotions, “Rambo 5” would have benefitted from the good media mileage on the small screen with the TV series. The TV series shall certainly help build the hype for the would-be fifth film and it would sure add to its almost guaranteed blockbuster success. But that is no longer the case now.

Stallone explained that “Rambo 4” was so brutal that he was surprised that the movie got an R-rating. He remembered saying then that it is going to be the last decent film of the action genre that he was going to do as a solo act. He said when he was able to accomplish it, he never felt the same willingness to do it again.