Williams, who played Teddy Roosevelt in the franchise’s three films, completed filming all his scenes in the third movie before he committed suicide on August 11, 2014.

In addition to Williams, “Night of the Museum: Secret of the Tomb” was also bidding farewell to actor Mickey Rooney, who died on April 2014.

The Epoch Times opines that seeing Robin Williams in his final film gives moviegoers that sinking feeling amid all the laughs that “Night of the Museum: Secret of the Tomb” is the comedian’s final movie and movie fans must start accepting that fact and move on.

The Jakarta Post meanwhile believes the movie only immortalized the laughs that Williams has shared to people most of his life as a comedian and that the film was indeed an excellent way of driving that point without going to the dramatics and melancholy.

Film director Shawn Levy made sure of that which had moviegoers enjoying a good amount of laugh with Robin Willaims, and most of the cast members too, which would have been the actor’s preferred send-off gift anyway.

Although it’s already the third film in the franchise, “Night of the Museum: Secret of the Tomb” sustained the laughs with its funny plot and global reach.

Ben Stiller, who plays Larry Daley, the night watchman of the New York Museum of Natural History who got promoted to being a special effects person, must restore the corroding supernatural tablet that provides the museum characters their ability to come alive at night.

Larry and the whole gang, who were smuggled into the crate along with the tablet, head off to London and elsewhere in a wild, adventure-filled epic quest to save the magic before it is gone forever. Larry also took his son Nicky to the trip that eventually gave the boy a newfound perspective in life.

Along the way, the laughs keep coming as the wild antics of each of the characters that tug along with Larry either get in the way of the quest or help it in the process.

Since much of the cast of the first two films returned for the third movie, “Night of the Museum: Secret of the Tomb” was definitely not short on the laughs. 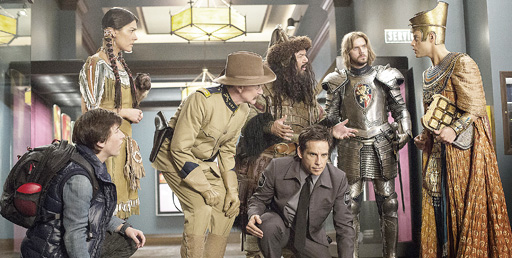