Everyone that is older than 15 knows how Miley Cyrus is. She started out as an actress on the show called Hannah Montana, but now you are more likely to see her in placed that include lights, bass thumping music and alcohol. In recent news, Miley Cyrus and Patrick Schwarzenegger have been making headlines because of what Patrick’s mother has said about her son taking up a relationship with the troubled singer. She had quite a following and now that she is dating Patrick and Maria Shriver (his mom) does not like it, there is even more news.

Now that the holidays are over, there must be a little less tension since Shriver pretty much banned the singer from family gatherings over Thanksgiving and Christmas. In case you were not aware, Maria Shriver is the wife of Arnold Schwarzenegger and that couple is worth millions of dollars. In recent news and according to online sources, Patrick is going to loss out on the family fortune of he does not stop seeing Miley.

The family fortune, in case you were wondering, is a cool $49 million that is sitting in a trust fund for Patrick. He will inherit the money when he turns 25 years old, but if the relationship is still going on, the couple plans to disinherit Patrick to keep him from the money. Sources claim that Arnold and Maria are convinced that Miley is a poor influence on their son and the only way to keep her away was to take away the money.

It’s not like Patrick is not going to have his own career as a movie star and Miley does not have money of her own, but it looks like Patrick’s parents are trying to make a statement. Patrick is currently 21 years old and has 4 years to figure out what he wants more. He currently acts and is a model with LA Models that hopes to put him in Armani and Ralph Lauren campaigns. 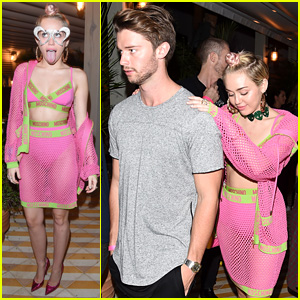 As with most parents, they are concerned over the influence that an older woman might have on their son. They both love their son and will most likely not take the money away, but as of right now it does not look like they are going to approve of the relationship. Mom and dad will eventually get over it when they realize that their son has to make his own mistakes. In the meantime, the relationship looks to be a healthy one that Miley has been documenting through Instagram for all of her fans to see.