The immigration struggle of four-month-old Iranian infant Fatemeh Reshad is over after a brief touch-and-go moment following the executive order of US President Donald Trump to ban citizens of seven Muslim-majority countries, including Iran, from entering America.

Baby Fatemeh has a life-threatening heart defect and she and her family needed to go to the US for treatment.

But everything is in the past now as Baby Fatemeh and her family already made it to the US, not because of the concession granted by the US President but because of the decision of a federal judge to halt the implementation of the executive order one day after it was issued on February 3.

The baby, who recently received the go-ahead to travel to the United States, was undergoing diagnostic tests at Oregon Health & Science University’s Doernbecher Children’s Hospital. And early results were promising.

Dr. Laurie Armsby, associate professor of pediatrics and interim head of the hospital’s pediatric cardiology division, said that Baby Fatemeh looks really well. The tests conducted to her upon her arrival at the Oregon hospital have confirmed her diagnosis and the urgent need for treatment.

Baby Fatemeh and her family had been scheduled to meet with doctors in Portland on February 5 but Trump’s order prevented them from traveling from Tehran, Fatemeh’s uncle, Samad Teghizadeh said.

The order had barred citizens from the seven countries from entering the US for 90 days, all refugees for 120 days and indefinitely halted refugees from Syria.

The court ordered both sides to submit arguments for and against the ban before a final ruling.

Structural abnormalities and two holes in her heart

Baby Fatemeh became one of the faces of dozens of foreign nationals caught up in the order. The trip to the United States was essential after doctors in Tehran told her family last month that she has structural abnormalities and two holes in her heart.

The family lacked the resources to treat the infant. Baby Fatemeh and her parents had boarded a flight to Dubai, United Emirates, but they were rerouted back to Iran and told to apply for a US visa in 90 days.

Teghizadeh said he was worried his niece wouldn’t make it until then. An American citizen for seven years, he lives in Portland with his parents, Baby Fatemeh’s grandparents, who also are US citizens. Baby Fatemeh succeeded with help from all corners.

Attorneys contacted the State Department to help the family obtain the waiver to navigate the ban. Fatemeh’s family reached out to the office of Sen. Jeff Merkley, a Democrat from Oregon.

State and federal officials intervened. Several congressional Democrats from the Oregon, including Merkley, asked Secretary of State Rex Tillerson to grant the waiver for the girl and her parents.

Doctors throughout the United States, Canada and Germany responded to calls for help, Amber Murray, the Washington-based immigration attorney working on the case said early this month. Doctors at OHSU Doernbecher agreed to waive their fees, and the hospital pledged to ensure that most of the surgery was already covered. 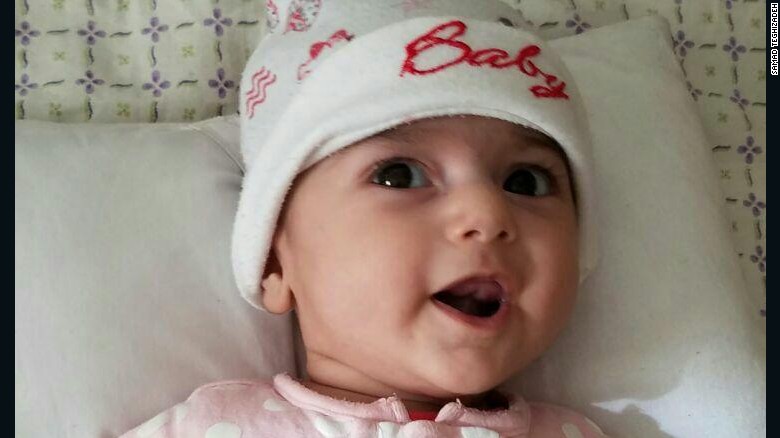 On February 3, New York Governor Andrew Cuomo said the infant and her family had received the necessary boarding documents to come to the US.

Baby Fatemeh has a fairly complicated anatomy with a muscular VSD, which is short for the ventricular septal defect.