If you are familiar to or you have played the game Elite in the past, there is a good chance that you have been waiting long for a sequel. The 1984 game introduced the concept of an open-world or an open-galaxy game, decades before the release of the first Grand Theft Auto title.

Before you were engaged in shooting gangsters in an open world, Elite introduced a game through which you could explore the mysteries of the universe in an open-galaxy game. When a sequel was released in 1993, it was clear that Elite was heading towards the path of high ambition and ever-increasing complexity. However, things seemed to have worked out differently as the developers decided once again to make the stars a home ground for modern gamers.

In earlier times, the open-world games were completely dominated by the space-themed titles. At the end of the Amiga-era, things started to change. Earlier, developers primarily focused on open-galaxy titles as rendering the inky black depth of space was much easier than the open-world cities of the present generation.

The decline in popularity of Elite was mainly because it was a British-made title. Hence, it was a major hit in the European countries but didn’t mean much to the American gamers. Currently, the most recent counterpart of Elite: Dangerous is EVE Online. They are both Massively Multiplayer Online games which lead to their popularity.

Someday, a well-designed spacecraft made by us might have the capability of travelling at a greater speed and catch up to these probes. It will certainly take some time, but we can rely on humanity’s advanced technologies in the future. On the other hand, with the help of Elite: Dangerous, you don’t have to wait that long! Elite: Dangerous is a crowd-funded reboot of the original 1980’s title, Elite.

Hidden in this title, are the Voyager 1 and Voyager 2 Probes which can be discovered and explored at the same time. Elite gamers are already aware of the massive, boundless nature of the ‘Elite’ universe. Earlier this month, a Reddit user, Goldenvale calculated the possible trajectory of the Voyager in the timeframe of Elite: Dangerous during 3300AD. 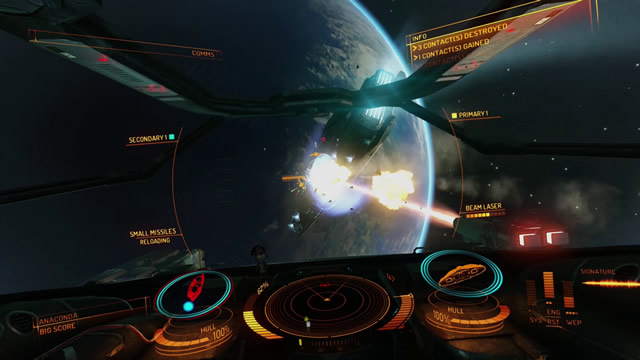 Therefore, it seems like Elite: Dangerous is off to a good start. Not only is it the HD update of the original game but it also includes many cool new additions. The game will be perfectly welcomed by the original gamers, at least, during the first few months.