Ever since the third season of the Legends of Tomorrow, we have been eager to read anything we can get our hands on regarding this crazy heroic saga. Any new information is welcomed and now, we have decided to share it with you.

Ever since the CW had decided to adopt even more of the DC Comics lore and turn into a live-action TV series and gave us the Legends of Tomorrow, a lot of people simply could not look away.

This daring tale of time-traveling heroes, (well, not heroes, legends, as the show calls them) has had us on the edge of our seats when they have shown us the perplexing final scene of the second season and we cannot wait to see how that unravels.

To remind you, DC’s Legends of Tomorrow is a superhero action/adventure based TV series that follows a team of misfits that the Time Master Rip Hunter had to assemble to try and save the future from Vandal Savage and immortal dictator who has been trying to conquer the world for several millennia.

It is interesting to note that Rip Hunter is played by Arthur Darvill who made his name by portraying Rory Williams in another highly-popular time travel show – Doctor Who.

While he did create the team, ultimately, after a long ordeal, he relinquishes the reigns to White Canary (Sara Lance, portrayed by Caity Lotz). Of course, we follow the Legends as they go through time, meet with a wide array of historical figures and battle a number of villains including Eobard Thawne and Damian Darhk that both “transferred” directly from Flash and Arrow respectively.

So, what is the news that we have for you? Well, it turns out that the fans of Dexter will have something to look forward to as Dexter alum Courtney Ford, best known for her portrayal of Christine Hill, has been chosen to play an important role in the coming season of this ensemble series.

It has been reported that Courtney Ford will appear as Eleanor, the daughter of Damien Darhk who, as we can remember, was killed by Oliver Queen in Season 4 of the show that started this entire universe: Arrow.

However, the character being killed off in Arrow did not stop Legends of Tomorrow to use him as a villain throughout the second season by having the heroes fight the version of him from the past. However, there are rumours that led us to believe that this time his reappearance will not be taking place due to time travel, but that he will actually be revived.

What we know about Eleanor is that we expect her to be every bit as smart and cunning as her father and will bring a dose of creepiness into the show. She is also said to have the ability to manipulate others, much like her father, it is just that we do not know if it is a superpower or a skill that she will be using to do so.

For those with an eye for a detail and a really good memory, Eleanor is not a new character. After all, she has appeared in the fourth season of Arrow as a child. Given the fact that Courtney Ford, the wife of Brandon Routh (Ray Palmer – The Atom) in real life is not a child, we can safely assume that they will either be visiting her in the future, or that her future self will be displaced in time and they will be trying to fix that issue as well.

But, what of her father? Given the fact that he will be revived after failing to essentially kill millions of people to fuel his magic, we can expect Darhk to be even more sinister than ever. As we have seen so far, being brought back from the dead in the Arrowverse has only made people more aggressive than ever and Darhk will probably be no exception. 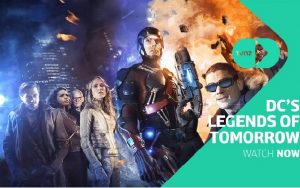 Of course, we have seen him in the second season of the show, but that was a less experienced, younger version of him, with next to no magic and no terrible experiences behind him.

However, Marc Guggenheim, one of the co-showrunners of the Legends of Tomorrow has said that we will see a very different version of Damien Darhk in the third season of the show. And we can only guess what that means.

Is there a chance that he will seek redemption? Probably not, but we will not know until the new season starts airing. Which is set to happen on October 8.