Beyonce is known to be very private about her personal life and family affairs. She does not want the media to pry too much on her personal and family life and the most that they and even the paparazzis could get from her and her husband Jay Z are the ones they normally get when the two of them are in public.

However, the doting mother in Queen Bey finally comes out as she proudly shared photos of her three-year-old daughter Blue Ivy during the recent wedding of her mother Tina Knowles to actor Richard Lawson in her website.

Tina and Richard married earlier this month in an intimate ceremony aboard a yacht in Newport Beach, California. Beyonce subsequently shared personal photos from her mother’s big day on her website.

The Mirror reported that Queen Bey has opened up her family album to share the wedding pictures of her mother Tina and new husband Richard. But the pictures that got the most attention however were that of her gorgeous daughter Blue Ivy enjoying a dance with rap mogul and businessman-husband Jay Z.

Blue is shown wearing a beautiful white dress like a perfect little princess. Her hair was tied at the back. She was shown in some pictures grabbing Daddy Jay Z’s hands for a twirl around the dance floor.

Jay Z was all smiles as he savors the moment as well, gazing lovingly at his daughter as they move their hips on the dance floor.

There is also an image where Beyonce is seen showing her husband and daughter a step or two on how dancing should be done. She was seen wearing a short white dress as she makes some of her moves on the floor, albeit slowly for the sake of Blue.

Another picture also shows Beyonce and Jay Z with their arms wrap around each other as Blue stands beside her mother for a family portrait. Blue pulls a funny face and closes her eyes as the photo is taken. Beyonce was already wearing a long and delicate lace dress in the picture that went well with her pretty flower headband.

All the guests at Tina and Richard’s wedding were requested to wear white during the evening ceremony and everyone really looked stunning. There was one wacky family picture where everyone pulled funny faces and stuck their tongues out.

Tina Knowles became officially single after parting ways and divorcing Matthew Knowles in 2009 following more than 30 years of marriage. In 2013, she started dating and has since found love in “Poltergeist” actor Richard Lawson who was also married before. 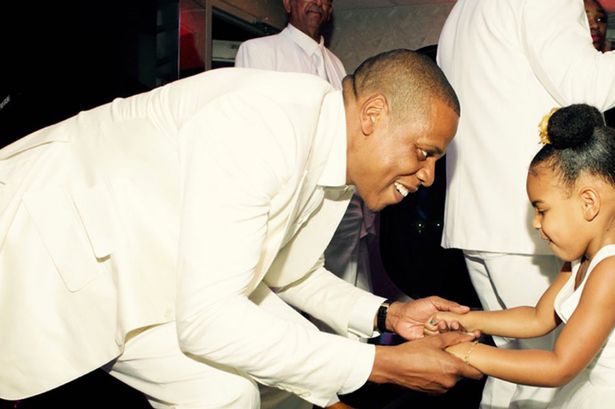