It’s back, it’s finally back! Attack On Titan is here, and we know when and where to watch gigantic, flesh-eating monsters, and we give you some glimpses of what’s to come.

The second season of Attack On Titan will have its premiere this weekend!

The first season of this show took the Internet by storm in 2013.

It’s amazing animation, awesome metal opening theme song and an interesting high concept apocalyptic story got us all. In its first season, we got to follow Eren Yeager who is determined to save humanity from titans that have appeared and begun to feast on human flesh. Eren had to watch as his mother was being eaten by a Titan. So, he decided to put a stop to this menace, he and his friends make a pact to join military, and this is where it all gets interesting.

The more you watch, the more you find yourself engulfed by this world and the character arcs, simply wanting to jump in and find out everything, join the struggle.

After season 1 ended, there were dozens of video games, a few attempts at live-action films, multiple spin-off animes and comics, even a crossover with Marvel Comics. All of this thanks to an undying fanbase that was superhumanly patient.

What else can you say about people who waited out one of the longest hiatuses? It took this anime four years to come out with new episodes about man-eating titans who fight with parkour-inclined soldiers.

Trailers and the plot of the second season

When Funimation announced the long-awaited second season, they also published an official synopsis that reveals a part of the plot: “Eren Jaeger swore to wipe out every last Titan, but in a battle for his life he wound up becoming the thing he hates most. With his new powers, he fights for humanity’s freedom facing the monsters that threaten his home.

After a bittersweet victory against the Female Titan, Eren finds no time to rest—a horde of Titans is approaching Wall Rose and the battle for humanity continues!”

When we take a look at the trailers, we can see that there will be a number of new Titans, including the one named “Beast Titan”. Man-eating giant monsters that look surprisingly humnoid are still plaguing the city of Shinganshina, and still, no one knows where they came from or why. In the first season, the first wall surrounding remains of humanity was breached, and it looks like the Titans will cross the second one in season two.

We get to catch a glimpse of the Armored Titan and Eren (as a Titan) going at it, though it seems like things will not end in Eren’s favor.

The creepiest thing we got from the trailers is “Titans have been protecting us from other Titans this whole time.” Wait, there are worse things out there, in that world?

Where can you watch it?

For those who want to watch the first season, the first 25 episodes are available for streaming on Funimation, Crunchyroll, Netflix, Hulu, and [easyazon_link keywords=”prime” locale=”US” tag=”masterherald-20″]Amazon[/easyazon_link].

And for those who want to watch new episodes, they will be all available simultaneously on Crunchyroll, Funimation, Anime Lab and Hulu. Season 2 premieres on April 1, and it is not a joke.

This time, there will be no trans-Pacific delays, so all fans will be able to watch every episode on the same day, subbed, and dubbed with just a slight delay.

Funimation founder and CEO, Gen Fukunaga stated that “Fan excitement has been building non-stop since our acquisition announcement and our clip reveal last December. Attack On Titan Season 2 will not disappoint.”

Now, it is time for a small disappointment 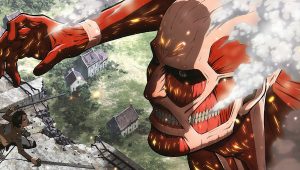 After four years of hiatus, the studio making Attack On Titan came back with only 12 episodes of the second season.

When the official Attack On Titan Twitter account reported that Season 2 will be released on Blu-Ray in two six-episode volumes, fans deduced that this meant that the entire season will last only 12 episodes, which caused outrage.

Animation creator Thomas Romain explained that this reduction in the number of episodes is due to budgetary cuts. In a Tweet, he stated “To people disappointed by Attack of Titans S2 being only 12ep. Sad but there is a real shortage of staff because of anime overproduction. It’s now nearly impossible to produce 26ep high-quality shows.

Studios are already doing their best within the schedule they get from clients”. This small studio shot to fame thanks to their animation in Attack On Titan, so it seems a bit unreasonable that they are unable to get a budget to continue making this anime.

So, enjoy it while it lasts, because who knows when we will get season 3!