Cupid, played by Amy Gumenick, will be back in episode 16 of Season 4 of the American superhero drama TV series “Arrow” when it airs on The CW on March 23.

Just like its spinoff show “The Flash,” “Arrow” is currently on a three-week break following the airing of its episode 15 on February 24.

However, instead of making two people fall in love with her arrow, Cupid will be on a vengeful mission to murder happy couples in love. Apparently, she is heartbroken again and wants to vent her ire on the happy pairs in Star City, notes Melty.

Team Arrow eventually learned that Cupid is killing couples on their wedding day so Oliver Queen, played by Stephen Amell, and Felicity, played by Emily Bett Rickards, decide to pose as bait in order to put an end to her murder mission.

The last time that Cupid appeared in “Arrow” was in Season 3 where she made extreme attempts just to attract the attention of the Arrow because he once saved her and her infatuation for him have heightened ever since. She left a trail of numerous deaths just to catch the Arrow’s eye but that only made Oliver Queen unhappy.

Cupid is actually Carrie Cutter, a former Starling City Police Officer. She made good in her Season 3 appearance so it is expected that Amy Gumenick will not disappoint for the upcoming episode 16 of “Arrow” Season 4.

Going through a rough patch

An interesting sidelight to the upcoming episode is the plan of Oliver and Felicity to pose as bait to be able to apprehend Cupid.

But just before they agree to the plan, ‘Olicity’ was actually having a rough patch in their relationship.

Felicity stormed out of their apartment after an argument with Oliver and she left her engagement ring on the desk as if taunting her fiancé to split with her. However, the fact that they, later on, agree to work together and pose as bait for Cupid only means that ‘Olicity’ will kiss and make up.

So going into that fake wedding just to entice Cupid to come out and go after them is a clever idea but it could also be a portent of things to come for their relationship. Shippers of ‘Olicity’ are hoping that Oliver and Felicity eventually tie the knot in the TV series before it wraps up in a few more seasons.

Killing off a regular character

There are reports that Nyssa al Ghul, played by Katrina Law, will be killed off soon in the “Arrow” Season 4. The speculations began to swirl wildly as the actress recently landed a role on CBS’s new TV series “Training Day.”

Apparently, Katrina is going to play Detective Rebecca Lee in the upcoming pilot episode of “Training Day,” which is a modern adaptation of Antonie Fuqua’s 2001 film, notes Fashion & Style.

However, since The CW is a sister network of CBS, it is also possible that Katrina Law may appear in both TV series without getting her character on “Arrow” killed.

The trailer for the upcoming episode 16 of “Arrow” titled “Broken Hearts” will see Damien Darhk, played by Neal McDonough, getting imprisoned and Malcolm Merlyn, played by John Barrowman, could lead a coup in order to be named the new leader of H.I.V.E.

Malcolm Merlyn has a score to settle with Oliver for removing his hand and Nyssa for disbanding the League of Assassins, he could try to get revenge on both characters if he takes over the H.I.V.E.

It is possible that Merlyn could order the killing of Nyssa by the H.I.V.E. and get revenge for her revolt against the former Ra’s al Ghul. 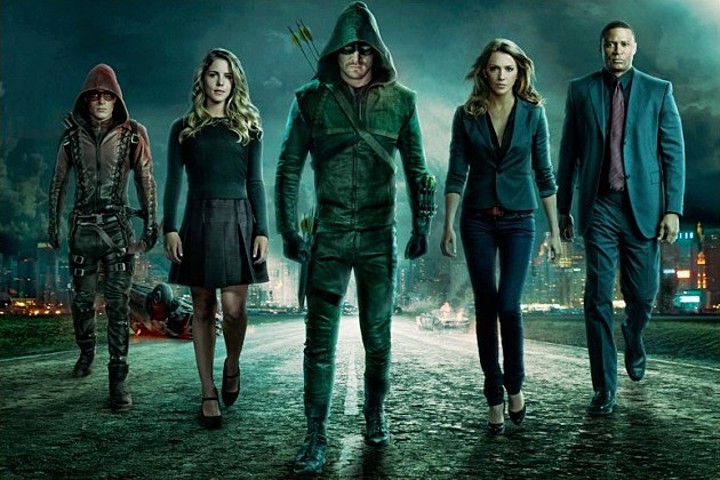 There are now speculations that the person in the tombstone shown at the start of Season 4 of “Arrow” is actually Nyssa and that explains why Oliver looked so angry in the cemetery.

Incidentally, episode 15 of Season 4 of “Arrow” showed the first ever live-action appearance of heroine Vixen, played by Megalyn E.K.