It arrived only a few days ago, and it’s already one of the most talked about trailers in the world. The trailer related memes are jumping out of the closet, and the wildest plot theories are being spun on the internet.

After a few teasers, the first full trailer for the new Justice League movie that is set to hit the theaters in November this year is here. The world is facing a new threat, and it is up to Batman and Wonderwoman to bring together a group of various heroes in order to save the day.

While haters say that this is just DC’s comeback to the upcoming Marvel’s Avengers, we think this film will pull its own weight without having to lean onto, or against any other picture.

What do we know?

So far, we can tell that in this movie, in order to be ready for an incoming threat, Bruce Wayne and Diana Prince will certainly have the chance to enjoy the company of Aquaman, The Flash, and Cyborg. We will get to see the assembly of one of the two most famous superhero teams. The Apokolips is a real threat, and they will all have to handle the Parademons the best they can.

Director of this film is Zack Snyder (also at the helm of Man of Steel and Batman v Superman: Dawn of Justice) who is known for his somber tone, dark movies and a load of CGI effects. Even though some were disappointed by BvS after we have seen this trailer we firmly believe that he did a good job this time around.

It is encouraging that this time, we cannot say exactly what will happen in the movie just based on the trailers (spoiler effect was one of the main reasons people hated BvS). DC was clever here. There is no footage of Darkseid, the deity ruler of Apokolips, nor any hints about the Man of Steel. From one scene shift to the other, this trailer only gives us more questions, while giving a hint of some serious fun ahead.

For one, while we watch the trailer, we are noticing a lighter tone than previous two movies had. Half of the internet is laughing at the Batman – Flash bit of dialogue where the fastest man alive asks the already famous question „What are your superpowers again?“ and Bruce Wayne replies, deadly serious „I’m rich“. This is awesome because we know that The Flash has to be witty and he has to be the positive one in the crew, so it means that characters of superheroes will be more alike their counterparts in the comics.

Another important thing in this trailer is Jason Momoa. We were honestly afraid that he will suck as Aquaman because he really isn’t the usual blonde comic-book master of the seas. But, he surprised us. Pleasantly. He is strong, powerful, interesting and funny! Arthur Curry is the other reason internet is all over this trailer, well, actually his sentence “Just like a bat, I dig it“.

Well, the short glimpse of Lois Lane tells us there are odds that Superman will be revived in this movie. According to the unconfirmed leaks, he will get revived by the big bad of the film and forced to fight against the Justice League until the superhero dream team makes him snap out of it. But, that is still just that – a theory.

Also, we got a speck of a scene where Amazons fight Parademons, which can mean one of two things. First, that Parademons attacked the Themyscira and the nation of fierce lady warriors had to fight back, or, that the threat to Earth was so big that Diana managed to persuade her sisters to come and fight alongside humans. 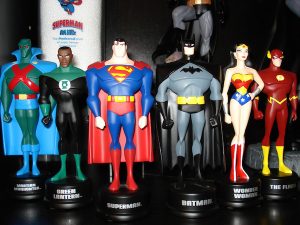 In the trailer, we also got our first look at Amber Heard as Queen Mera, and we love it, we saw Billy Crudup as Barry Allen’s father and Commissioner Gordon who is portrayed by J.K. Simmons.

There will be a bunch of cool weaponry, the best Batmobile yet, alien invaders from a dystopian hellhole, funny quips and amusing comebacks, a ton of new uptakes on old backstories, Mother Boxes and a big bad you never saw before Darkseid’s lieutenant Steppenwolf.

The rest of this trailer shows us a lot of great looking action with the current five members of the Justice League, and the rocking tune of „Come Together“ definitely helped to get us all hyped up about this upcoming film!