Stars of this new comedy show shared some info and insights. Let’s start off with an explanation. Brockmire is a new IFC’s show. Hank Azaria (known for his voice acting on The Simpsons and live-action like Mad About You) is an interesting comedic choice for a baseball announcer who wears plaid blazers and who got closest to fame when he had a huge on-air meltdown in 2007, only a few hours after he discovered his wife in a very compromising position.

The show starts off at a point 10 years later, the time which Jim Brockmire had spent in exile abroad, when he returns to the states, only to find out that his greatest embarrassment has become one among the first viral memes.

Most of the first episode focuses on his worst moments and their consequences.

During his exile, Brockmire became even bigger of a drunk than he already was, charming while at the same time toxic, and willing to do anything in order to keep himself in top shelf liquor.

That desperation is what gets him into a bleak American town under the name Morristown, a place that economic progress forgot. He came for a baseball team, the Frackers, whose owner Jules (Amanda Peet, that you might remember from Togetherness) hopes that a revitalized baseball team might help her ignored hometown. Unfortunately, she also just really loves getting drunk and fooling around, with that good-small-town-girl charm that looks so good on Peet.

This show is the story of how this man tries to make peace with himself, but also a sports inspiration story, a sappy story of finding love in a small town… But, to be honest, mostly it is an amazing, raw humor comedy that isn’t as vulgar as it is insanely intimate.  In spite of the fact that we are following a minor-league alcoholic baseball announcer, this show is actually fun to watch.

If you ask the lead actors, the main characters have no redeeming qualities, but the boozy baseball announcer and his boozy baseball trainer counterpart find solace in each other will they spend their time in a town everyone forgot.

Interestingly, that town was filmed in Atlanta, where the journalists finally caught up with Peet and Azaria and got their view of the show.

Since this show was an uncertain thing at best from the very beginning, Azaria admits he didn’t believe it will happen until the moment he heard “Action!” on the first day of the shooting. Even then, he had trouble believing it, and the actor said “It took about a week. But it’s been amazing. I’m having more fun than I’ve ever had in my life doing anything.”

On one day of filming, several ESPN broadcasters and Joe Buck were there for a scene, and Azaria was happy as a child to work with actual broadcasters. He was thrilled at how they fit into the scene playing themselves, claiming they were ready to cut their scenes in case they were lousy actors, but that never happened, cause in actor’s words “They were amazing. They’re great.”

When Peet was asked about what attracted her to this script, her answer was interesting “You know, when I realized sometime around episode two or three that she was middle-aged owner of a minor league team in the middle of nowhere who’s an alcoholic, I was like, “Sign me up.”

But why was she so thrilled with this role? Well, according to her, most of her career, she got to be someone’s wife or girlfriend, or simply a plot device role, without real substance or sense of humor. So, wh 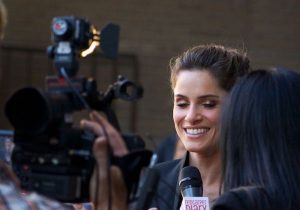 en she started reading the script for Brockmire, she got really excited when she realized that her character “Had a potty mouth and drinks too much and has no children.”

So, how do the actors see the relationship between their characters?

Azaria said that they “Both have the same exact level of functional alcoholism, so they’re destined to be together.” And he loved doing this show with Amanda Peet, who’s a great fit for this role.

When he looks at his character, he sees a guy who had a genuinely hard time in life, and even though it’s funny, really painful things happened to him, and he is not in a good place, and then, then he meets the only woman who is just made for him. Azaria sees this as anything but a romantic story, but Peet had a quick reaction to this statement of his “What? Are you out of your mind? It’s so romantic.”

We leave it up to you to decide which of the lead actors is right about Brockmire.