A new love interest is prepared for Peggy in “Agent Carter” for the second season of the show, and we’ve already heard some information about the new man in her life. It might not even be just one person – there have been some teasers that she could be interested in several people at the same time in the next season, which would definitely spice up the story quite a bit.

Michele Fazekas, executive producer of the show, recently said that the character’s new romantic interest has to be different from Steve Rogers – played by Chris Evans. Chris Dingess, on the other hand, explained that the show’s main character has actually fallen in love with Steve before he was even Captain America, and during that time, he was quite skinny and nothing like his final form.

When the team behind the show were thinking of a new character that could be used as the romantic interest of Peggy, they were trying to get someone with similar qualities like Steve, and that might not be about his physical qualities. That is to say, the new character might not actually be some sort of a hunk with a shield, but he could be close to Steve in terms of his personality.

Tara Butters, executive producer on the show, revealed that they wanted to ensure that the new love interest for Peggy is going to have his own unique characteristics that set him apart from Steve too, and they aren’t trying to go for a carbon copy of the original character. After all, Peggy isn’t going to “fall for the same guy all the time”, as Butters put it, so we’re likely going to see an interesting contrast in the way the new character is presented.

On the topic of possibly introducing multiple love interests for her, Atwell said that this might indeed be true, but we don’t know any details yet. The story is going to transition from New York City to Los Angeles for the new season, and according to Atwell, Peggy will travel to the new city and join Jarvis – played by James D’Arcy – after she’s received a new assignment. Jarvis will be there helping out Howard Stark to get his movie studio started.

One thing stands out in all the talk about the new love interest that Peggy will be chasing though – he’s always referred to as a male, which pretty much leaves out the option that we’re going to see any romance between Peggy and Angie. This has been a common rumor for fans of the show, but the story is apparently not going to move in that direction at all.

In fact, we don’t even know if Angie will show up in the new season at all, as there have been rumors that we might not see her for a while. On the other hand, according to Butters, we’re at least going to see various other familiar faces in the new episodes, so fans shouldn’t worry that the cast lineup of the show is going to change significantly. 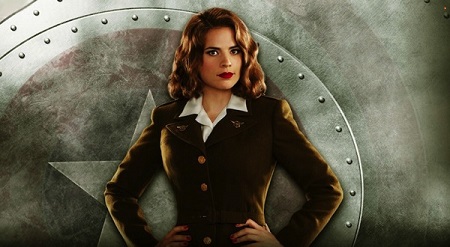 Still, some changes are to be expected here and there, but for the time being, the show seems to have found a rather stable situation where all of its characters have a clearly defined purpose and they’re all progressing in an obvious way, evolving and giving us a deeper look into what makes them tick. This alone has had many fans interested in what they might see in season 2 once it airs.