General Motors’ long-range electric car, the 2017 Chevrolet Bolt, was named as the North American Car of the Year, beating the Genesis G90 and the Volvo S90 during the recently held North American International Auto Show held early this month in Detroit, Michigan.

With the award for the Chevrolet Bolt, it became GM’s crown jewel in its electric car lineup since the EV already won the same type of honor in two contests a few months ago, details USA Today.

The decision on the North American Car of the Year award was made by motoring journalists who regularly test-drive vehicles so it is their collective vote that defined the winner for the prestigious citation.

In the same event, the Chrysler Pacifica minivan was also named as the North American Utility of the Year, the first time that such award was handed out in the event.

The Pacifica has been regarded and commended for shedding the traditionally stodgy image of minivans by embracing technology, sleek design, and an alternative powertrain.

Meanwhile, the Honda Ridgeline pickup truck was also named the North American Truck of the Year.

The vehicle has a range-per-charge of 238 miles, double than most electric cars on the market today except those from luxury electric automaker Tesla. But the Bolt, in many cases, is about half the price of Tesla’s Model S or X. It just went on sale with a starting price of $37,495 before federal tax.

The Chevrolet Bolt is not to be confused with the Chevrolet Volt, a pioneering plug-in car with a backup gas engine. The Chevy Bolt is a pure electric vehicle and has no gas engine.

Chevy has been unabashed about trying to get out the message that it’s first with a mainstream-priced fully-electric long range car.

Steve Mojaros, Chevrolet Marketing Manager, said that there has been a lot of talk about building an affordable electric car with a 200-mile range that brings electric vehicles to the mainstream, but only one manufacturer has done that, and it’s Chevrolet or General Motors.

He made the statement when the Bolt won the Green Car of the Year award, given for environmentally friendly cars in November.

With a base price of $37,500 before incentives, GM’s 238-mile electric hatchback is the first mass-priced electric car with a range of more than 200 miles.

It has already won numerous awards, including this site’s Best Car to Buy title for the year.

Media days at the Detroit Auto Show always open with the announcement of the year’s North American Car and Truck of the Year awards, and this year is no exception, notes Green Car Reports.

But green-car enthusiasts had a special reason to follow this year’s awards, now broken into three categories: car, truck, and utility vehicle.

That was the chance that a battery-electric car, the 2017 Chevrolet Bolt EV, would be dubbed the North American Car of the Year, an award that does not often go to “green” vehicles. 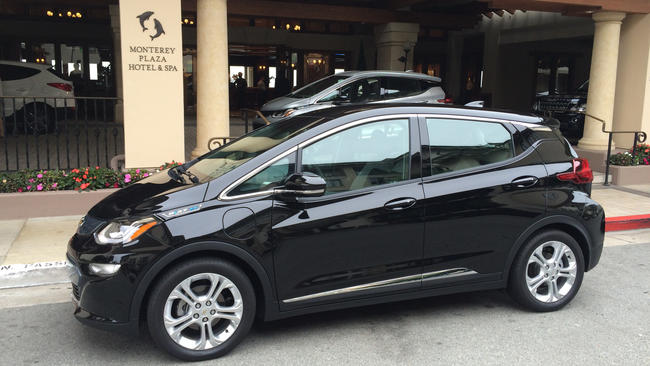 The 2017 Chevrolet Bolt came out of the market late last year. It needed to come to enjoy its head start from the upcoming Tesla Model 3 electric sedan, which is touted as its biggest competitor in the electric sedan market.

However, German automaker Volkswagen announced in October that it would also be launching an electric sedan called the Volkswagen I.D., which could go farther than the 2017 Chevrolet Bolt and the Tesla Model 3 on a single charge.