The 2015 Nissan Maxima is expected to feature major exterior revisions along with a few tweaks under the hood. The vehicle was first launched back in 2009 and has undergone numerous minor cosmetic upgrades since. However, the vehicle is long overdue for a proper upgrade, and this is what the upcoming variant promises.

Some of the upscale design elements of the 2015 Nissan Maxima are its boomerang-shaped headlamps, classic & reserved body structure and wider body. If these are not enough to attract attention, the bright metallic orange palette will surely work its magic!

Even though the production variant is expected to sober up a bit, the general design ideas will stick. Nissan has made some serious progress in terms of ergonomics and visual aesthetics and the future looks bright for the automakers at the moment.

Even though there is no official word on the performance or powertrain setup, the experts believe that the 2015 Nissan Maxima could draw power from a 3.5-liter V6 engine block displacing 290 BHP along with 261 ft-lb of torque. The engine is hooked onto a CVT transmission system and can accelerate from 0 – 60 MPH within 6 seconds. The average fuel economy is 19 – 26 MPG within the city and on the freeway, although, this is insufficient for a daily commuter.

However, for all the performance fanatics out there, the 2015 Nissan Maxima will not disappoint. If you are looking for a weekend tourer, the Maxima is what you need as Nissan has promised to make major improvements to the vehicle‘s performance, credibility and functionality as a whole.

Nissan will offer All Wheel Drive and Rear Wheel Drive options from the beginning while this vehicle will go up against the market stalwarts such as the Toyota Avalon, Chevrolet SS, Ford Taurus, Dodge Charger and the Chevrolet Impala. Fans have been drooling over the proposition of the upgraded Maxima ever since the vehicle was teased, and we are waiting to get behind the wheel to determine the vehicle’s on-road potential. 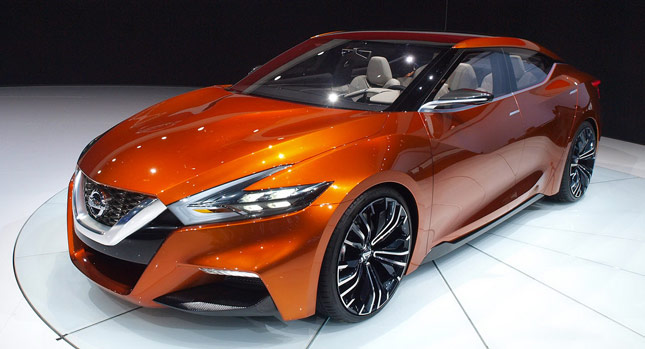 Nissan promises to keep the production version of the Maxima as close to the prototype as possible, although, the practical aspect needs to be determined too. The V-shaped chrome bar up front along with the LED headlamp design, is a first for this vehicle, although, Nissan is looking forward to introducing this technology in other vehicles in the future too.

The 2015 Nissan Maxima is Japan’s take on American muscle cars, and it remains to be seen how close they have got to the actual idea.

What is your take on the 2015 Nissan Maxima? Let us know via the Comments Section below. For additional news, reports and updates from the world of automobiles, stay tuned as we return soon.