This show really had its ups and downs, but the ending of season four really made it up for all the mistakes it made, so as soon as we found out that season 5 will happen, we started digging into it! Here’s what we know.

CW announced that season 5 is happening, and we couldn’t possibly be more excited! The apocalyptic drama will get another season to shock and amaze us with its sci fi twists and turns, and its amazingly charming cast.

Season 4 of The 100 left us wondering. Who survived the nuclear apocalypse that was caused by the meltdown of all the nuclear plants all over the world? Who is the young Nightblood with Clarke? Are Bellamy and others alive in space? What happened to people in bunkers? Who is on that prison ship? What happened during the six-year time jump? What will be the major threat in season 5?

Writer and producer of the show, Jason Rothenberg discovered bits and pieces of the future plot. He stated that the Earth is now again survivable, after the 6-year jump. The radiation levels are down, so the air is breathable, but most of the planet is a wasteland, and the small Garden of Eden that Clarke has found is an exception.

The ship we saw at the end of the season is filled with people who have been asleep for a hundred years, ever since the first apocalypse, and now they will be willing to fight for this one piece of land. According to Rothenberg, the battle for Eden will be the main threat of season 5.

We are all curious to see what was happening over the course of the last 6 years, and the show creators are aware of it, so there will be flashbacks throughout the fifth season that will show to us what has changed and how. Rothenberg said, “There’s a lot of cool stuff that happened in those six years and I don’t just want to talk about it.”

The 1200 people in the bunker were supposed to be safe, but Clarke’s call to Bellamy discovered that she wasn’t able to reach the hatch from all the rubble, so she has no idea what happened to them.

Averopoulos (Octavia) said that her character has no idea what she’s doing “but she doesn’t want to set off chaos with 1,200 people in the bunker. … You’ll see what her plan is to keep the peace and how she reprimands others in her own special way.” So, we know that people in the bunker are alive, but we still have to wait to see what will happen to them next.

The space crew is alive, Murphy will change during these 6 years, Raven will keep being the key ingredient for their survival, and during the panel, at Comic-con the crew commented that Monty and Harper might not be a couple anymore when the show returns in 2018!

There’s a chance that people who were left on the Arc at the end of the season will come back to Earth before season 5 ends, and we got that from Jason Rothenberg’s statement that he expects Bellamy and Octavia to be reunited “I think ultimately, obviously, they will be together again at some point, assuming they both survive between the hiatus of Season 4 into Season 5.” 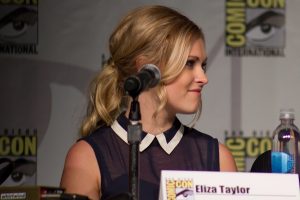 The fact that they will meet again does not mean that there will be no clashes of their strong wills again – they are both leaders, and since Octavia will have to go dark in order to keep the peace, her and Bellamy’s view of leadership might be completely opposite.

No matter what changes, Clarke and Bellamy are still the heart of this show, and Rothenberg teased about the potential development of their relationship in the upcoming season.

All of this makes us even more eager to see season 5!