The GoPro Hero 5 has yet to be released but rumors are already rife that if it comes out either later this year or early next year, it would be priced lower than the GoPro Hero 4.

The GoPro Hero 4 is currently priced at $499 and reports have it that the GoPro Hero 5, although loaded with more features and a couple of technological breakthroughs, will come out of the markets with a retail price range of anywhere from $400 to $500, notes Crossmap.

If the rumor is true, then it will come out as cheaper indeed than the GoPro Hero 4.

Even if it will come out with the same price of $499, the GoPro Hero 5 will still be cheaper considering that GoPro Hero 4 is almost a year old by then and the former is obviously new.

While GoPro has yet to make any statement or announcement to confirm or deny the pricing rumors about GoPro Hero 5, it is obviously giving current and prospective buyers of GoPro Hero 4 some second thoughts. The biggest question that comes to their mind is whether to purchase the GoPro Hero 4 now or wait until the arrival or release into the market of the GoPro Hero 5.

The GoPro Hero4 comes in two different models – the Hero4 Black and the Hero4 Silver – with the former pricier by $100 from the latter.

However, both action cameras have stunning image quality and powerful new features that take the Emmy Award-winning GoPro performance to a whole new level.

Hero4 Black comes with incredible high-resolution 4K30 and 2.76K video and a remarkably high frame rate of 1080p120 video. It also features a more powerful A9 processor that delivers super slow motion at 240 frames per second.

Combined with the powerful new features and technologies including improvement to audio, usability, wireless connectivity, among other facets, the GoPro Hero4 Black is the most advanced and highest-performing GoPro action camera ever.

On the other hand, Hero4 Silver blends pro-quality video and image capture with the convenience of built-in touch display.

The GoPro Hero 4 is also lightweight and is very durable too as it can take a good deal of wear and tear. 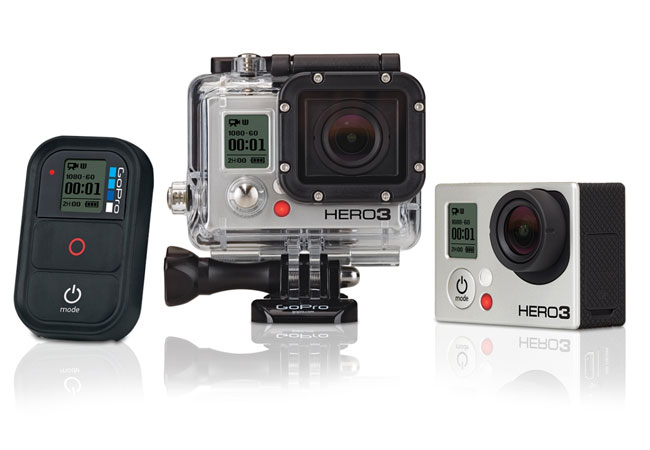 The action camera weighs less than 100 grams so it is also very easy to carry or strap in various extreme situations, which are common among extreme sports fans.