Having had the opportunity to talk to Floyd Mayweather Jr. up close and in person, Manny Pacquiao says that the WBO welterweight champion seems to be a good person but becomes bossy when his people are around.

The Filipino boxing icon was actually speaking from firsthand experience during his more than one hour one-on-one talk with Floyd Jr. at a hotel in Miami.

Pacquiao said that it was actually Mayweather who did much of the talking during their meeting and he really sensed that Money was essentially a good and nice person. The Pacman added that Floyd Jr. immediately changes when he is surrounded by his people and becomes the tough boss that he has been projecting himself to be.

Obviously, Mayweather needs to protect his image as a mean and powerful person both in public, the media and among his people because he is Floyd Mayweather Jr., boxing’s pound-for-pound king. But all by himself, or in this case with Manny Pacquiao, he settles in to become a sensible and nice person.

Yahoo! Sports reports how Manny Pacquio recounted his chance meeting with Floyd Mayweather Jr. at Miami in the last week of January.

After serving as judge in the 2015 Miss Universe Beauty Pageant held in Miami, Pacquiao’s scheduled flight back to LA was cancelled.

Since he had nothing to do, he decided to watch the NBA game between the Miami Heat and the Milwaukee Bucks at the American Airlines Arena, the Heat home floor. Pacquiao is also a good friend of Heat coach Erik Spoelstra, who is also half-Filipino.

So while sitting on courtside, he was surprised to see Floyd Mayweather Jr. right across him. Pacquiao said he was not totally surprised because he knows that Floyd Jr. has a house in Miami and is a regular in Miami Heat game. He also learned later that he was actually sitting in Floyd Jr.’s usual seat whenever he watches a Heat game.

So during a break in the game, Floyd Jr. approached Manny and the two of them were surrounded by a lot of people. Everyone was thinking that the two boxers would go at it right there and then. After a brief chit chat, Mayweather got Pacquiao’s mobile number and set up the meeting at Pacman’s hotel suite later that night.

Mayweather then visited Pacquiao at his hotel and they talked about finally making the fight that the world has been longing to see happen.

As a matter of fact, Mayweather even posted a 12-second video on Instagram of that one-on-one meeting with Pacquiao a few days ago where he was quoted as saying that the two of them have to make the fight happen before they leave the sport. 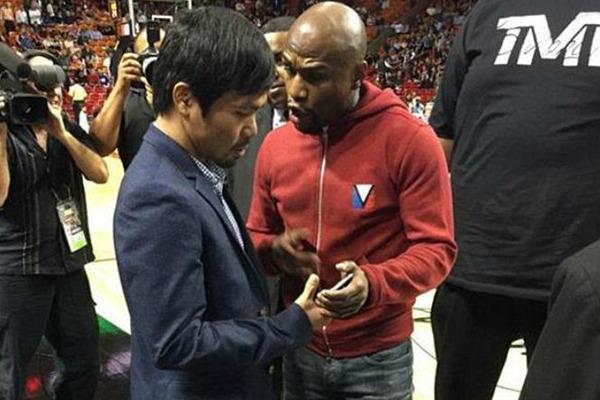 Negotiations are still ongoing for the scheduled May 2 fight at the MGM Grand Arena and Pacquiao says that he is just waiting for the official announcement that would come from Mayweather or his camp. In the meantime, he already started light training to keep himself in shape in the event that an announcement of the fight is finally made.