Although he was a very popular child star when he was 10 years old up to around 14, when he decided to retire from acting, Macaulay Culkin has been sparingly acting in the movies since.

The last time he acted on a full-length film was way back in 2007 when he did “Sex and Breakfast.” But he just played a bit role in that film, not unlike in the 1990s when he became the breakout star of the “Home Alone” series acting as the eight-year-old Kevin McCallister.

Since then, he went back to acting but only on TV series. He has appeared in shows like “Kings,” “The Jim Gaffigan Show,” and lately the web series “Dryvrs” created by Jack Dishel.

After trying his luck in singing and miserably failed when he served as frontman for the band, The Pizza Underground that parodies the songs played by The Velvet Underground but with pizza-themed lyrics, Macaulay may have felt that it was time for him to go back to acting, where he has a better chance of career redemption. After all, at 35 years old, he is not getting any younger.

But his biggest break in his return to acting will also happen this year when he will star in the new film titled “Adam Green’s Alladin” that will see him acting alongside Natasha Lyonne of “Orange is the New Black” fame and comedian Zoe Kravits, notes The Wrap.

A subversive take on the classic tale

“Adam Green’s Alladin” is actually a subversive take on the classic Arabian Nights tale which stars indie rocker Adam Green as the titular character of the film.

In the movie, Aladdin’s symbolic imagination shall make the famous genie lamp a 3-D printer. The princess is a socialite and the planet gets a sex change. The movie also follows Alladin and his dysfunctional family who lives in a city ruled by a corrupt Sultan.

Culkin will star as Ralph, the rebel leader. Lyonne will play Aladdin’s mother, and Kravitz will play the Old Miner.

It seems that the inclusion of Macaulay Culkin also has something to do with Jack Dishel who shall also be appearing in the independent film along with Alia Shawkat, Bip Ling, Francesco Clemente, Devendra Banhart, and Har Mar Superstar.

Meanwhile, the first trailer of “Adam Green’s Aladdin” has already debuted online. The trippy one-minute video clip for the new film, which describes itself as hyper-sensory, features physical paper mache sets that look as though they were lifted straight from a cartoon, details the Daily Mail.

Culkin was seen in the trailer chanting with a small crowd as he wears a Russian military officer’s hat and coat, decorated with chains and a Las Vegas belt buckle.

The entire set of the film was built in a single warehouse using Adam Green’s own artwork. He said that part of the reason why he wanted to make a modern-day version of Aladdin is because he was obsessed with the symbol of the genie and the lamp and the wishes.

Green adds that his kickstarter video, which managed to raise almost $52,000 so far, was well above his base target of $45,000. So he is confident of the chances of “Adam Green’s Aladdin” in the box-office.

The movie will be released this year but Green has yet to announce a specific date for it. 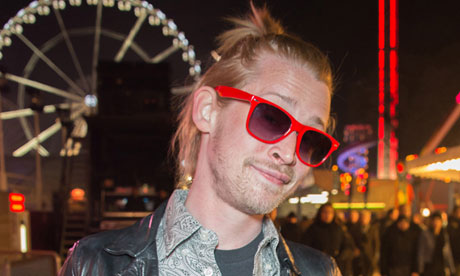 In other news, exactly 25 years from the time he broke into the big screen as Kevin McCallister in the very successful Christmas movie “Home Alone” shown in 1990, Macaulay Culkin has reprised his role but no longer as a kid but a grown up man in the new web series called “Dryvrs.”

Macaulay takes on the role of Kevin as an Uber driver. In a 311-second video clip of episode 1 of “Dryvrs,” he portrayed McCallister as a scarily messed up man picking up an Uber passenger.