Rockstar Games appears to be whetting the appetite of “GTA Online” gamers so much now that a new round or leaks have been released again about the upcoming Heists DLC.

Christian Today details that the new content for the multiplayer version of the open-world action adventure video game “Grand Theft Auto V” shall feature a yacht, a snow car, an unidentified flying object (UFO), a xero blimp, and the space docker, which would give the game a new dimension and gamers a new round of delights.

With the delay in the launching of “Grand Theft Auto V” on the PC from January 27, 2015 to March 24, 2015, the developer has been trying to appease the anxiety and frustration of fans and gamers by giving them constant doses of leaks on what they should expect from the Heists DLC.

The Heists DLC is reportedly going to come out before the release date of “GTA 5” on the Windows PC.

Fans and gamers of “GTA 5” have long been waiting for the Heists DLC since Rockstar promised it when it launched the game on Xbox 360 and PlayStation 3 in October 2013. It has been 15 months since the promise had been made and it looks like the new content will come out on the 17th month of waiting.

But then, given the history of Rockstar and its penchant to really get into the nerves of gamers and enthusiasts, it’s not even sure if the Heists DLC would actually come out in March.

Because gamers have been waiting too long for the new game content, Rockstar appears to have contented itself by just releasing leaks one after the other in an obvious effort to calm down the anger and frustration of the video game fans.

Renowned GTA gamer DomisLive, in his YouTube channel, disclosed that the new content will have tons of new stuff which would not just delight but actually surprise gamers to no end.

DomisLive said that he got the latest round of information or leaks from funmw2, a famous GTA leaker which also released game codes for yacht DLC and other rare vehicles.

Dom compiled all the leaks released by funmw2 and uploaded it on his YouTube channel to give “GTA Online” gamers the heads up on what to expect from their favorite video game. 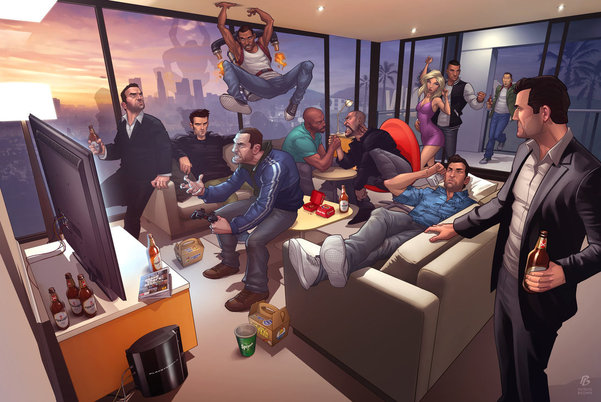 There will also be top priority vehicles in the new game patch including the heli-carrier, the sm-boa, and CJ’s IOA boat. There is also an aircraft carrier included but it wasn’t working during the test game.

Dom likewise shared two links for every gaming console, the first one is meant to gain access to the tow trucks and space docker while the second is meant to provide access to the UFOs, the xero blimp, and the atomic blimp.