Democrat governor Pat Quinn is moving away from his position, but not everyone is going to remember him very fondly at this point. One of his last moves as acting governor was received very poorly by medical marijuana patients all across the state, as the governor not only refused to award the promised licenses to growers and dispensaries before he left office, but he went ahead and made the state even more restrictive towards medical marijuana dispensaries than it already was.

Many have been expressing their disappointment with the way the governor has handled the situation, and the sentiments haven’t just been coming from medical marijuana patients. State Representative Lou Lang, who was originally in support of the state’s medical marijuana law, said that he was “livid”, and he saw the new policies as a huge setback for the state’s progress.

Now, the situation seems grim for patients, as the new governor Bruce Rauner has been an open critic of the state’s policy during his election campaign. Many were hopeful that Pat Quinn would put effort into moving the program forward before he leaves office in order to prevent Rauner from causing any real damage, but now it seems that it’s too late for that, and Rauner has been given a lot of freedom regarding the state’s medical marijuana policies.

Under the new legislation that was signed by Quinn on Monday, regulators of the state now have the power to impose even stricter penalties on those who have been found in violation of the medical marijuana law. Previously, the worst they could do was revoke licenses, but now they can impose fines and even harsher penalties, while everyone associated to medical marijuana growers, including patients and caregivers, can now face more thorough background checks before they’re allowed access to the plant.

Some have been trying to minimize the blow to Quinn’s reputation by claiming that there were other factors in play regarding these laws, and it wasn’t entirely his fault that the regulations were passed like that. However, in the end, state agencies were reportedly simply waiting for the governor to put his signature on the legislation, so the blame is entirely on him, according to Lou Lang. 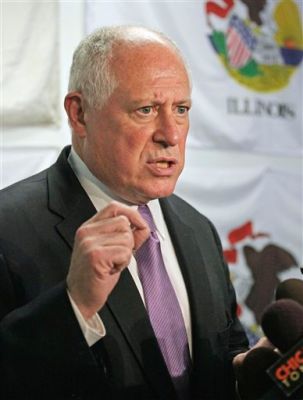 It’s not clear how things are going to move forward for Illinois now, but Bruce Rauner’s policies are not very likely to be in a positive direction for medical marijuana patients, so many have been worried that the state is going to see its progress stall significantly in this area. On the other hand, it’s possible that Rauner might change his mind in light of the hugely negative public reaction, although that’s not very likely, according to most.