Honda will be introducing the world’s first predictive cruise control system and it would debut on its Euro-spec 2015 CR-V.

The system would enable the Honda CR-V to foresee and react to other drivers or cars cutting into its own lane, reports Motor Trend.

Known as the Intelligent Adaptive Cruise Control (i-ACC), it can predict when a certain vehicle would cross its lane five seconds before it happens. In driving, this is called cutting or cut ins and this has been one of the key reasons why road accidents, particularly rear collisions, happen especially if the driver of the overtaken vehicle was caught by surprise.

With the i-ACC in place, even if the driver is startled, the system will automatically apply a gentle break to prevent an accident. Subsequently, it will apply a stronger brake to keep a safe distance from the overtaking vehicle.

Of course, the i-ACC is just a cushion and the driver can also manually do the gentle and stronger braking eventually. The cruise control system is just a fallback to ensure that no accident takes place in the event of so-called cutting or cut ins.

The automatic braking of the system can also be seen by the driver through an icon on the display and he would also be enlightened on its necessity.

Typical with vehicle safety systems, the i-ACC uses camera and radar to determine the position of other vehicles on the road.

The cruise control uses a predictive algorithm which evaluates the relationship between the target (cutting vehicle) and maximum of six vehicles around to project its trajectory and thus foresee the timing of its cut in.

The i-ACC would enable the driver to perform smooth maneuver through intelligent vehicle control while at the same time achieve both risk reduction for risk collision and comfort driving.

Honda said the technology was specifically designed for European roads following an intensive research by the company on driver behavior all over Europe and used it to develop the predictive algorithm of the i-ACC.

It is for such reason that the predictive cruise control system will debut on the European version, the right-hand drive variety, of the 2015 Honda CR-V Executive.

But since Honda is capable of duplicating the technology for left-hand drive vehicles, the predictive cruise control system will likely make it to the 2015 Honda CR-V in the US as well as in other countries where left-hand driving applies. 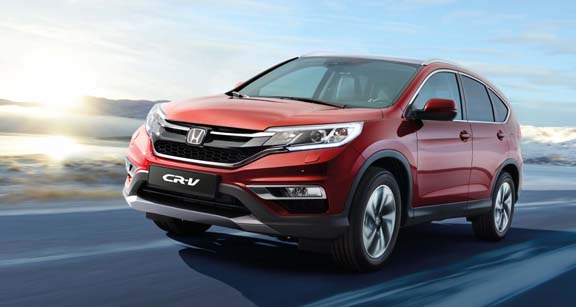 Honda vehicles have long been regarded for their safety features and the predictive cruise control system is yet another feather on the cap of the Japanese automaker.

The company has already been cited for numerous times and by numerous award-giving bodies in the global motoring industry for its high level of commitment to safety, reflected through the safety features of its vehicles.