Season 12 of the American medical drama TV series “Grey’s Anatomy” will premiere on ABC on September 24 but speculations on what fans should expect in the upcoming season are just too plenty on the internet these days. In fact, rumored spoilers are too plenty that if every bit of information is true, the show can already be spinned off to several more TV series.

The series finale of Season 11 caught every fan of the show by surprise as Derek Shepherd, the character played by Patrick Dempsey, was killed off through a car accident.

It turns out later that Patrick Dempsey no longer renewed his contract for the series and he was only good for Season 11, leaving his character’s fate to the hands of showrunner Shonda Rhimes.

Rhimes went to the dramatics as she killed off Derek’s character to open up plenty of storylines for Season 12 and not just focus on the impact of Derek’s death on Meredith.

Back in the finale of Season 10, another major character in the series Cristina Yang, played by actress Sandra Oh, also bid goodbye to the show after deciding against the renewal of her contract with the series. But instead of taking the path of death, her character simply left Grey Sloan Memorial Hospital to take on the directorship of a hospital in Switzerland.

Now comes reports that actress Ellen Pompeo’s contract with “Grey’s Anatomy” is only good for Season 12. While there are no reports about ongoing contract negotiations between the actress and the producers of the show, speculations are rife that Pompeo does not intend to renew and would again leave the fate of her character Meredith Grey in the hands of Rhimes.

Latinos Post got wind of reports that Shonda Rhimes is planning to kill Meredith at the end of Season 12 and go the same way as Derek did in the series finale of Season 11. But until a confirmation is made by the showrunner or any other authority, this information should be taken with a grain of fine salt for now.

Meredith has been experiencing the onset of Alzheimer’s disease, the same illness which killed her mother Ellis Grey. If she will die in the show, it looks like the disease will be her particular pathway.

The International Business Times reported that the title of the first episode of Season 12 of “Grey’s Anatomy” has leaked online and from the sound of it, it appears painful.

The image leak showed the title of Season 12 episode 1 as ‘Sledgehammer’ which is probably alluding to the impact of Derek Shepherd’s loss to Meredith and also to Grey Sloan Memorial Hospital.

But other than following the impact of Derek’s death on the life of Meredith and her two children, there are also plenty of things that fans can chew on in the show including the aborted marriage of Jackson, played by Jesse Williams, and April, played by Sarah Drew.

There is also the marriage of Catherine, played by Debbie Allen, and Richard, played by James Pickens Jr., after having that fierce argument over the position of new Chief of Surgery in the hospital.

Amelia Shepherd, played by Caterina Scorsone, and Owen, played by Kevin McKidd, also appears to be moving towards the right direction on course to a romantic relationship. Owen helped Amelia listen to the last voicemail that Derek left Meredith. 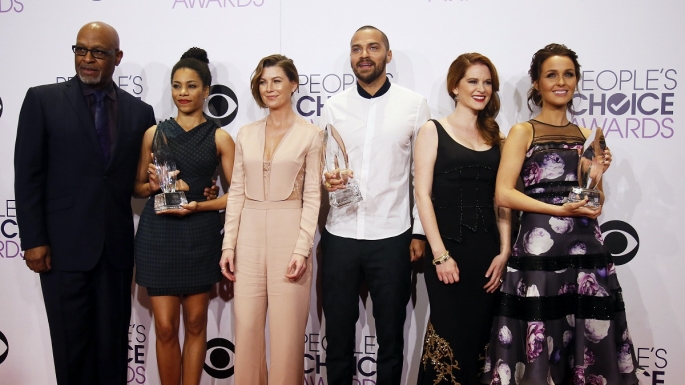 The season will possibly give a stronger focus to the relationship of Alex Karev, played by Justin Chambers, and Jo Wilson, played by Camilla Luddington.

During the “Grey’s Anatomy” ComicCon panel, Camilla Ludington was quoted as saying that she is getting personally worried about the relationship of Alex and Jo as it is possible that it may finally get into a rough sailing in the upcoming Season 12.