Filming for the fifth installment of the “Pirates of the Caribbean” movie was halted for two weeks following the hand injury suffered by its main star Johnny Depp on March 10 in the Gold Coast in Queensland, Australia.

The injury had nothing to do with the filming but the actor decided to go home to LA to have the minor surgery done on his injured hand.

It was disclosed then that the filming would not be affected by the sudden departure of Depp since there will be other scenes to shoot that do not have Captain Jack Sparrow, the character being played by Johnny Depp in the movie, in it.

But apparently, the production team have completed filming of the other scenes but the actor has yet to get back to Australia to resume shooting.

On March 26, the production team has announced to some 200 crew that they would not be working for the next two weeks until the actor comes back to the set. Resumption of filming in the Gold Coast for the movie, that shall have an official title of “Pirates of the Caribbean: Dead Men Tell No Tales,” will be on April 15, notes MSN News.

Return to the new missus

After he got injured on March 10, the 51-year-old Depp returned to his 28-year-old newly-wedded wife Amber Heard in the US to take time off from his filming work while he recuperates from the minor surgery.

Johnny and Amber tied the knot in private ceremonies on February 8 at the actor’s private island in the Bahamas.

As early as March 11, it was already expected that filming would be delayed as production has to wait until the actor gets back to the set fully recovered.

“Pirates of the Caribbean: Dead Men Tells No Tales” is a multi-million dollar collaboration by Disney Studios and Jerry Bruckheimer Productions. It is due to hit theaters on July 7, 2017 yet.

With its US$250 million production budget, it is the largest movie ever filmed in Queensland, Australia to date.

In addition to Johnny Depp, the movie also stars Javier Bardem as the villainous Captain Salazar, Australian actor Geoffrey Rush who shall be reprising his role as Captain Barbossa, and Australian upstart actor Brenton Thwaites, who will play the role of a young British soldier. Espen Sandbert and Joachim Ronning are directing the movie.

Other than the hand injury to Johnny Deep, “Pirates of the Caribbean: Dead Men Tell No Tales” has had to contend with an unforeseen delay also in February in light of a threat from a storm. 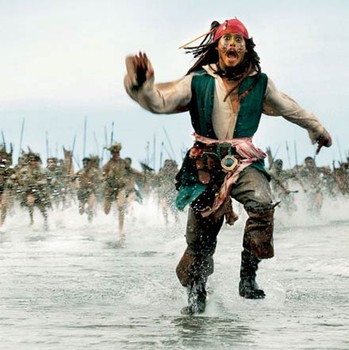 Late in February, a category 5 tornado, known as Cyclone Marcia, passed near the site of the filming of the movie. The cyclone crossed the coast close to Rockhampton on the Queensland coast, which was more than 700 kilometers north of the Gold Coast studio where the filming for “Pirates of the Caribbean: Dead Men Tell No Tales” is taking place. The studio and the filming were spared from the cyclone.