This month the popular mobile gaming title ‘Clash of Clans’ will release a much anticipated update. Supercell, the developer for Clash of Clans, has been taking in player feedback and seems to have addressed many concerns with the game. However, they are being quite secretive with the new features the update may include.

Over the past week, Supercell has been releasing teaser videos which have led to the community speculating as to what content the update will include.

Clash of Clans is an innovation in mobile gaming, bringing the elements of an MMO (Massive Multiplayer Online) to the tips of your fingers via your smart phone or tablet.

The game is a smooth combination of patients, skill, and teamwork in which you create your own clan using in game resources and compete against rival clans to gain dominance in the virtual land. However, just like any video game, the players have maxed out the strategy and content of the base game.

Most fans that have topped out the content in the current game are hoping that the newest update, scheduled for later this month, will bring them and their clanmates, a wide expansion that will provide a vast amount of stimulating content for their gaming pleasure.

Many anticipated possible add-ons include: An expanding single player, adding further upgrades to buildings and items, and possibly even letting them control a second city. While the teaser ads released by Supercell do hint at these types of updates, the developer has hasn’t confirmed exactly what the update will include. 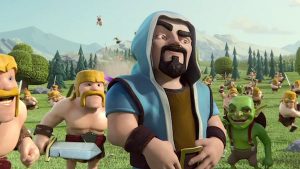 In fact, one of the ways we know this update is going to be game changing, literally, is that the developer is keeping the actual contexts extremely secretive. Supercell has released no exact contents for the update, but has been teasing the update on its Twitter page for days now.

The teasers themselves, however, show in game characters contemplating crossing an ocean, and it seems like some sort of watercraft lies in the future of Clan fans. But that could mean any number of things for the update.

This could indicate that there is a new world which Supercell will open on clash of clans with this much anticipated update, or it could simply be an addition of watercraft to the game as it stands. It could mean new resources are available, or new units. Or, it could mean all of the above.

Another picture released by the developer has the likes of reddit work full time on theories. The picture depicts clan units coming from the ocean by boat at night. Both of those a key to theorists. The fact that the photo is clearly in the middle of the night has fans thinking that Clash of Clans will introduce a night mode.

Now, folks are suggesting that the translation of the text in the photo includes “night world of extreme speed.” Many long time fans hope that the new mode will increase the pace of the battle royal style game and introduce new challenges for them as long time players.

Whatever the case may be, Supercell is clearly working hard to hide the exact content, and give the players something new out of this extremely entertaining game.