Chris Paul of the Los Angeles Clippers chose the wrong time to stare down at Kevin Durant and the bench of the Oklahoma City Thunder seconds after he made a jump shot in front of the Thunder’s bench.

The Clippers were down 23 points later in the third quarter and Kevin Durant resting on the bench, All-Star Chris Paul took 6’10” Thunder rookie forward Mitch McGary to school by crossing over him and nailing a jumper over his outstretch arms, details Yahoo! Sports.

Paul then mean-mugged at Kevin Durant, who was standing at the sideline in front of the Thunder bench, as if saying that I can also do over you pal.

To which, Kevin Durant was seen on the video saying, you’re down 20 now, homie, implying to Chris Paul to look at the scoreboard first before doing that stare down thing.

Durant actually posted his response via his social media account in cjzero where he again included a video of the stare down and his response thereafter to Chris Paul.

Paul’s shot reduced the lead of Thunder to 21 points with a little less than 14 minutes to play. The Thunder eventually completed the demolition of the Clippers and the final score was pegged at 131-108.

The Clippers loss to the Thunder was the third in a row, all road games. But the sad part is that their average losing margins on those three road games is 22.33. They lost to Toronto by a total of 33 points; defeated by Cleveland by 11 points, and lost again to Oklahoma by 23 points.

Another problem for the Clippers is that they also lost All-Star forward Blake Griffin to injury prior to the game against the Thunder. Griffin is indefinitely out.

It remains to be seen how Chris Paul will again carry the load of his team for the next few games but the unnecessary stare down would definitely not do his team any good at this time.

The Thunder was actually coming from a tough home loss to the New Orleans Pelicans on February 6 when they hosted the LA Clippers on their home floor on February 8.

Without Griffin, Kevin Durant was unrelenting in the frontline finishing with 29 points in 29 minutes of action. As it was a blowout win, Durant was hardly necessary to keep the Clippers at bay all game long. 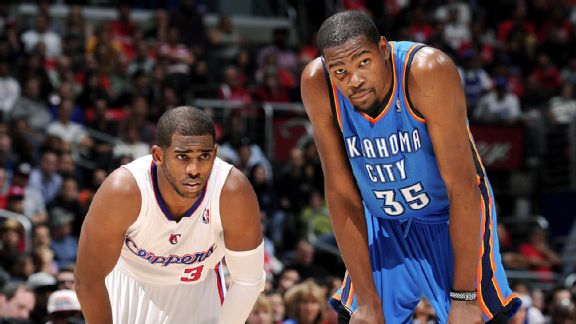 That is why OKC rookie forward Mitch McGary also had his field day in court, piling up 19 points and 10 rebounds in 24 minutes of play. It was his most number of minutes played for the entire NBA season. The 24 minutes is actually triple his average court exposure of about eight minutes per game.

It was also McGary who was guarding Paul when the Clippers guard made that crossover and stared down at Durant and the Thunder bench after.