Chris Brown and Soulja Boy have gotten into a nasty tiff! Soulja Boy has already started on the wrong foot in 2017 thanks to his interview with VladTV. He then found Chris Brown threatening him for liking the photo of his ex-girlfriend, Karrueche Tran.

Chris Brown might have moved into the arms of Krista Santiago, but that didn’t stop him from fuming at the fact that Soulja Boy liked Karrueche Tran’s photos.

Soulja Boy has always loved attention and he immediately made the whole episode public on Twitter. He posted that Chris Brown had called him up and spoke about wanting to fight him since he had liked Karrueche Tran’s photo.

Chris Brown wasn’t going to stay quiet, and he immediately responded back to Soulja Boy. He said that he is ready to take on Soulja Boy in the boxing ring for three minutes and that would be enough to determine who is more powerful.

Soulja Boy while lashing out at Chris Brown brought about the incident of beating Rihanna up. In the video, Soulja Boy says that he feels Chris Brown is acting tough because he has already beaten up Rihanna.

Fans had believed that Brown would refrain from commenting on that, but he responded to the charge. Chris Brown apologized for the act, saying that he was only 17 years at that time and he has grown up to become a 27-year-old man and knew how to rectify his mistakes.

Soulja Boy is reportedly making things dirty now. He has started dragging Royalty Brown into the fight. Chris Brown is clearly upset about the whole situation and is repeatedly asking Soulja Boy to fight like a gentleman and not to make things dirty.

He said that he would make life hell for whoever brings in his daughter and every gangster code follows the rule of keeping little women and children out of the fight. Chris Brown repeatedly tells Soulja Brown not to make things nasty, since that isn’t how he plays.

Billboards reported that the Twitter war had turned into a nasty one since Chris Brown even went on to drag his 2-year-old daughter into the mess and claimed that Soulja Boy was jealous. Chris Brown said that his daughter, Royalty, in spite of being only 2-years-old, has five times the money that Soulja Boy has, and this is the main reason why he hates Chris Brown so much.

International Business Times reported that Chris Brown had shared a video that showed some men with guns asking Soulja Boy to stop trashing Chris Brown on the social media. The men looked like they belonged to a gang and even said that they would be waiting for Soulja Boy. 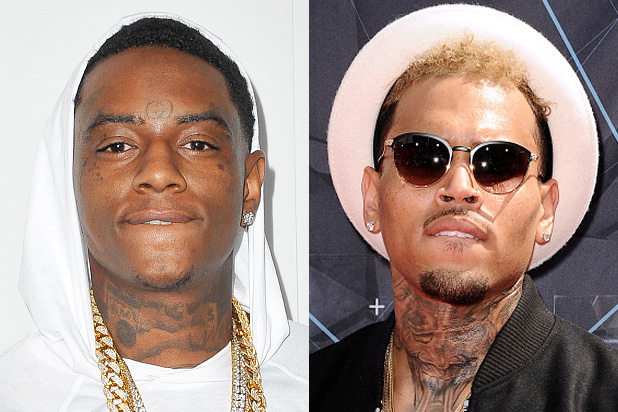 Brown has taken down the video since then. He claimed that he was a grown man and even mentioned that he doesn’t want to kill Soulja Boy. Chris Brown has stopped attacking Soulja Boy, but the latter is still missing Brown on the social media.

Karrueche Tran, whose new photo started the feud between Chris Brown and Soulja Boy has refused to make a comment on the issue and is staying away from it. Brown had claimed that he comments on Karrueche’s photos not because he is interested in her, but because he wants her to feel good about herself.