While the 2016 Ford Bronco rumors proved to be inaccurate, it still did not lessen the fan excitement and enthusiasm over the next-in-line rumors, the 2017 Ford Bronco.

Critics believe that the interest on the 2017 Bronco comes from the fact that the Bronco is actually the most loved truck brand of the American car manufacturer.

Since the reports came out that Ford Motor Company is planning on releasing a new Bronco model, the interest on the legendary truck has not diminished at all, especially among American car owners.

Although Ford has yet to confirm the reports now spreading online regarding the 2017 Ford Bronco, reports are saying that the vehicle shall be taking the market by storm with a modern-day SUV. The new Bronco shall reportedly challenge all its competitors in the highly competitive SUV segment offering comfort, elegance, and modern-day technological advancements, reports Tampa Bay Review.

The 2017 Ford Bronco shall reportedly have a boxy design which would really be elegant in nature and its exterior appearance will catch the eyes of age-group automobile lovers.

Same platform as the Ranger

The last official Ford announcement regarding the Bronco was back in the North American International Auto Show 2004 in Detroit, Michigan where it showcased a concept of the brand, resembling like a cross between a jeep and an SUV.

Then in February this year, the company announced that a new crossover is, in fact, in the works. The vehicle would be based on the same platform as the Ford Ranger, and it would compete head-on with the Wrangler and the upcoming Trailblazers.

According to Carsoid, the new model is actually the 2017 Ford Bronco, after all, the American carmaker has a crossover currently based on the Ranger and it’s the Ford Everest.

This means that the US model of the car, the Bronco, will most likely be based on the same platform as well as a decent number of its parts.

The vehicle shall be using a body on frame chassis and that it will be built in the same factory side by side with the Ranger.

The exterior of the car is deliberately primitive and brutal. It will have a square shape as like it is cut from a single piece of metal featuring large round xenon headlights, squeezed onto the sides of the rough grille lattice in the middle of which is flaunted the inscription ‘Bronco.’

An aircraft cockpit for a cabin

The Bronco may have already been confirmed by Ford Motor Corporation in February this year but the American carmaker has yet to specify exactly when it is going to come out.

So when the 2016 Ford Bronco rumors started dying down, out came the speculations about the 2017 Ford Bronco.

Based on latest rumors, the 2017 Ford Bronco shall feature an aircraft cockpit concept in the driver area of its upcoming SUV.

This means that the vehicle shall be equipped with all kinds of modern feature and latest technology, with the reach of the driver’s hands.

The dashboard of the 2017 Ford Bronco shall reportedly feature a large touch screen and many infotainment systems for controlling many different features in the cabin of the SUV.

It has also been rumored that the 2017 Ford Bronco shall come out of the US retail market in the middle of next year. 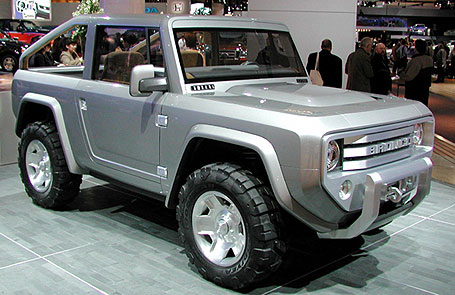 Those who are privy to how car manufacturers release their models for the year know that it is normally done at least three months before the actual model year. So releasing a 2017 model car in the middle of 2017 is not right from a perspective of the car company and the car itself because it actually shortened its lifespan.

Pricing for the 2017 Ford Bronco has yet to be released but it is likely to be costly given the level of technology that it will feature both inside and out.